Governor Greg Abbott, the Texas Department of Public Safety (DPS), and the Texas National Guard are continuing to take historic action in 2022 under Operation Lone Star to secure the border and stop cartels and criminals from smuggling deadly drugs, weapons, and people into Texas.

Since the launch of Operation Lone Star, the multi-agency effort has led to over 336,000 migrant apprehensions and more than 23,000 criminal arrests, with more than 20,000 felony charges reported. In the fight against fentanyl, DPS has seized over 354 million lethal doses of fentanyl during this border mission.

On April 13, the first group of migrants transported from Texas arrived in Washington, D.C. after Governor Abbott directed the Texas Division of Emergency Management to charter buses to transport migrants to our nation's capitol.

As of today, Texas has bused over 16,000 migrants to sanctuary cities:

This busing strategy has become an integral part of the Governor's response to the Biden Administration's open border policies, providing much-needed relief to overwhelmed and overrun Texas communities.

On May 20, Governor Abbott activated the Joint Border Security Operations Center (JBSOC) and directed DPS, TMD, and TDEM to coordinate Texas' response to secure the border in preparation for a mass influx of illegal immigration from Mexico into Texas.

The JBSOC, located at DPS headquarters in Austin, serves as the state's multi-agency command and coordination center for statewide border security intelligence and operations to include tactical, marine, air, and ground. It also coordinates the deployment of strategic barriers along the Texas-Mexico border, including razor wire.

Governor Abbott issued an executive order in July authorizing and empowering the Texas National Guard and DPS to apprehend illegal immigrants who illegally cross border between ports of entry and return them to the border.

"While President Biden refuses to do his job and enforce the immigration laws enacted by Congress, the State of Texas is once again stepping up and taking unprecedented action to protect Americans and secure our southern border," said Governor Abbott. "The cartels have become emboldened and enriched by President Biden's open border policies, smuggling in record numbers of people, weapons, and deadly drugs like fentanyl. I have authorized the Texas National Guard and Texas Department of Public Safety to begin returning illegal immigrants to the border to stop this criminal enterprise endangering our communities."

On October 17, Governor Abbott announced the launch of the State of Texas' coordinated "One Pill Kills" campaign to combat the growing national fentanyl crisis plaguing Texas and the United States. This announcement came after the Governor directed state agencies to begin ramping up efforts to combat the deadly fentanyl crisis.

In November, Governor Abbott ordered DPS and the Texas Military Department to expand their unprecedented efforts to combat the growing illegal immigration along the Texas-Mexico border. In a letter to DPS Director Steve McCraw and TMD Adjutant General Thomas Suelzer, the Governor outlined the need for the Operation Lone Star partners to defend Texas amid the Biden Administration’s ongoing failure to secure the border.

"Until Congress acts or the Biden Administration does its constitutionally required job, Texas Guardsmen and Troopers must bear the burden of securing the border," reads the letter. "You must continue to keep Texans and Americans safe and protect against an invasion of the southern border. I order you to use all resources and tools available to repel immigrants from attempting to cross illegally, arrest those who cross illegally and return them to the border, and arrest criminals who violate Texas law."

On May 19, Fox News Correspondent Bill Melugin joined DPS Sgt. Jimmy Morris for an exclusive on the ground in tracking down illegal immigrants and drug smugglers. Melugin and Sgt. Morris found bundles of illegal drugs and smugglers hiding in a bush.

On August 3, DPS Lt. Chris Olivarez joined Fox Nation for Maria Bartiromo’s Broken Border Crisis Summit and gave a tour of the DPS drug warehouse in McAllen, where bundles of illegal drugs seized by Operation Lone Star are processed by DPS personnel. With dangerous cartels running multibillion-dollar smuggling businesses, Lt. Olivarez explains that once the bundles of packaged drugs are carried across the border they are broken up at stash houses and smuggled further into the country.

"What we’re seeing that’s unique from previous years is luring younger, juvenile Americans into criminal activity like human smuggling and drug smuggling because it’s being advertised through social media platforms,” said Lt. Olivarez. “There’s a lower prosecution risk for these juveniles, so they’re exploiting that."

In early September, DPS special agents, with assistance from Border Patrol, located a stash house in Webb County. Inside the house were 21 illegal immigrants—16 males and five females—all from Guatemala. Agents also discovered seven bundles of narcotics. One person was arrested and charged. All 21 illegal immigrants were referred to Border Patrol.

On October 25, DPS troopers stopped a dump truck for a commercial vehicle inspection on Interstate 35 in La Salle County. During the stop, numerous illegal immigrants fled from the truck’s cargo area and ran to the brush. The driver, from Poteet, was arrested and charged with 84 counts of human smuggling, and the illegal immigrants from Guatemala and Mexico were referred to Border Patrol.

Just before the Christmas holiday, DPS’ Aviation Operations Division apprehended three illegal immigrants in Culberson County who were smuggling 3 pounds of fentanyl—or roughly 1.3 million lethal doses—and nearly 200 pounds of marijuana. The smugglers from Honduras, one of whom was a 14-year-old, were trying to avoid detection by walking through the mountains and desolate terrain.

Between June 28 and July 5, Texas Army National Guardsmen deterred or apprehended nearly 800 illegal immigrants along a 15-mile stretch of land near Laredo. Most of the 800 migrants were caught actively attempting to evade detection by hiding within Laredo residential neighborhoods or by trekking across private ranch land. During one apprehension, an illegal firearm was discovered on one of the illegal immigrants. In another apprehension, it was discovered that some illegal immigrants had been captured only days before in the same area after being processed by federal agencies.

In July, Tactical Air Control Party Texas (TACP) members with the Texas National Guard eradicated drug smuggling in a 30,000 acre area that was formerly a hotbed for trafficking operations prior to the soldiers’ deployment. Roughly a dozen TACP airmen were responsible for capturing more than 350 illegal immigrants, 34 human smugglers, and more than 800 lbs. of marijuana during a three-month span.

The soldiers had to work through limited cell reception in the area that impeded their ability to communicate among themselves and relay tactical information to mission partners, Border Patrol, and DPS. Using cutting-edge technology from the Texas Military Department, airmen were able to create their own communication network incorporating satellites. This allowed soldiers and law enforcement partners to coordinate and respond to illegal activity along the border within minutes.

"What these airmen have been able to accomplish in five months is remarkable," said U.S. Air Force Capt. Andres Cepeda. "At the end of the day, this is our community, and we are effecting change, taking drugs off the street and stopping human trafficking. It feels awesome."

On December 9, the Texas National Guard announced that it added 45 drone pilots to be used in response to the increasing number of illegal crossings along the border. This drone program will help Operation Lone Star elite brush teams locate and arrest trespassing migrants and prevent more illegal crossings in unforgiving terrain.

"It’s important that we are successful on Operation Lone Star," said 1st Lt. Austin Laughlin. "With this program we can better stop the people with nefarious intent from crossing illegally into Texas." 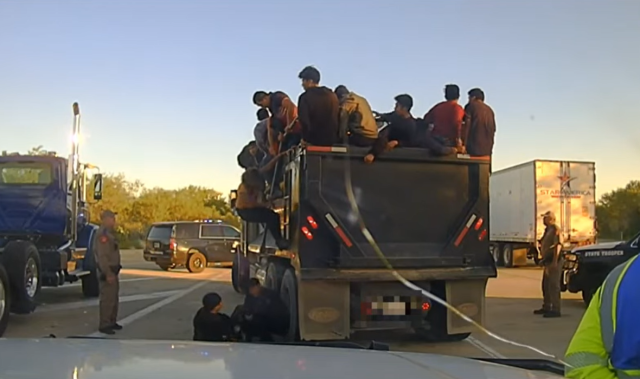