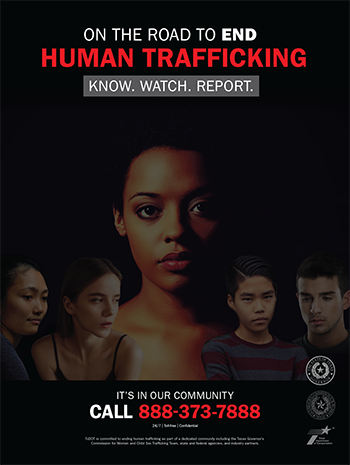 In 2016, a University of Texas report estimated that over 300,000 Texans are currently being trafficked, including 79,000 youth victims of sex trafficking. For the upcoming year, the Commission is focused on assisting the state of Texas in the fight against trafficking.

The Governor’s Commission for Women is working with the Texas Department of Transportation to raise awareness of the cruelty of human trafficking. Human traffickers hold men, women and children against their will, destroying their individuality, stripping away their dignity. Through force, fraud or coercion, these victims are made to work — many times in the sex industry — for little or no income. Some are just young girls and boys, sold as mere property, as modern-day slaves. Texas is already a national leader in the fight to end Human Trafficking. By learning to recognize and report suspected trafficking, you can help us “On the Road to End Human Trafficking.” Various materials are available on TxDOT's website. Know. Watch. Report. Together, we can make a difference.

As an expansion of the 2019 On the Road to End Human Trafficking campaign, the Austin District launched the Human Trafficking Awareness Training Initiative to expand our knowledge of human trafficking, how it pertains to the transportation industry, as well as the proper methods of reporting suspicious activity.

The Attorney General of Texas’ Office has a training video to educate audiences, called “Be The One.” It includes:

Watch the video and share it with others. You can request a DVD copy of the training video from betheone@oag.texas.gov.

We believe instances of human trafficking can be drastically reduced by building strong mentor-mentee relationships and educating young people on the lures of trafficking.

This effort ties in closely with First Lady Cecilia Abbott’s Network of Nurture since over 60 percent of child sex trafficking victims were children from foster care or group homes.

A few organizations with established mentoring models include:

The Child Sex Trafficking Team in the Office of the Governor is building a sustainable capacity, enhancing expertise, promoting policies, and creating new and leveraging existing collaborations to: