The Governor’s Committee on People with Disabilities is proud to announce that the annual employment awards have been renamed after disability rights champion and independent living movement leader Lex Frieden, one of the architects of the landmark Americans with Disabilities Act of 1990. 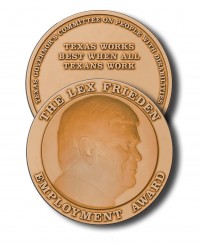 Frieden is the UT Chancellor's Health Fellow on Disability, a professor of biomedical informatics and rehabilitation at UT Health Science Center at Houston and director of the Independent Living Research Utilization Program (ILRU) at TIRR Memorial Hermann Rehabilitation Hospital. He was appointed by President George W. Bush as chair of the National Council on Disability in 2002, and also served an eight-year term on the United Nations Panel of Experts on the Standard Rules for Disability. Frieden is author or co-author of more than 60 articles on independent living, disability rights and rehabilitation. He has received two Presidential Citations for his work in the field of disability, and was awarded an honorary doctorate in law by the National University of Ireland in 2004.

Since 1979, the Governor's Committee has worked to highlight the efforts of employers to hire and retain employees with disabilities, and to recognize Best Practices that positively affect employees with disabilities within the workplace.  An employer whose philosophy is to support employment opportunities for all Texans, including people with disabilities, benefits the local community as well as the state. The attitude of working as a partner in the community is considered a strength to be highlighted and encouraged by the presentation of our annual Employment Awards. The active and enthusiastic promotion of business opportunities for people with disabilities is also an important element in the consideration of the award.

Each year during the month of October (National Disability Employment Awareness Month), a local committee in Texas hosts the Annual Employment Awards Ceremony, and the winners in each of several categories are introduced to an appreciative audience. Award categories include large, medium, and small employers, as well as non-profit employers, the Entrepreneurship Award, Martha Arbuckle Award and the Governor’s Trophy.

How to Submit a Nomination

Nominations are due by noon on September 9, 2019. Please submit the appropriate Entry Form for your nomination.

Nominations, including self-nominations, in any of these categories are encouraged. A completed submission form specific to the category, along with any supporting material, can be sent to:

Above and Beyond:  Employment Practices

Suggestions for creating a welcoming and inclusive environment for ALL people to help make your business or service stand out.

Above and Beyond: Employment Practices in PDF format

What Can YOU Do to Advance the Employment of People with Disabilities?

View the “I Can” public service announcement (PSA)