Governor Greg Abbott today announced that the City of Victoria, having completed the multi-step training and certification process, has been designated as both a Music Friendly and Film Friendly Community by the Texas Music Office (TMO) and Texas Film Commission, respectively. A virtual certification ceremony will take place on Tuesday, November 17 during the Victoria City Council meeting. The Music Friendly Community program seeks to foster music business economic development in Texas cities and communities. The Film Friendly Texas Community program helps to grow local jobs and local economies by promoting the Lone Star State as the premier destination for film, television, commercial, animation, visual effects and video game production.

“I congratulate the City of Victoria on earning both the Music Friendly Community and Film Friendly Texas designations. This simultaneous achievement is a testament to the community’s hard work,” said Governor Abbott. “As our focus is on safely and strategically reopening and revitalizing all aspects of the Lone Star State—work, school, entertainment and culture—Texas is committed to working alongside our communities to ensure they have the knowledge and tools needed to succeed. I am proud of all that the Texas Music Office and Texas Film Commission have accomplished in helping communities like Victoria to spur their local economies."

The ceremony will be broadcast during the announcements/reminders section of Victoria City Council's meeting: https://www.youtube.com/user/VictoriaMeetings/videos 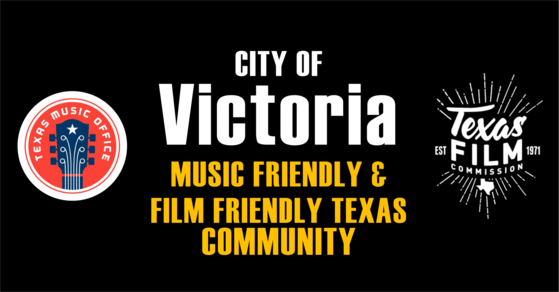