Texas Ramps Up Border Strategies Ahead Of Title 42 Ending

Since the launch of Operation Lone Star, the multi-agency effort has led to over 333,000 migrant apprehensions and more than 22,000 criminal arrests, with more than 20,000 felony charges reported. In the fight against fentanyl, DPS has seized over 354 million lethal doses of fentanyl during this border mission.

On Wednesday, Governor Abbott called on Texas Attorney General Ken Paxton for an investigation into the role non-governmental organizations (NGOs) may have in planning and assisting illegal border crossings into Texas. In a letter to Texas Attorney General Ken Paxton, the Governor highlights the need for Texas' vigilant response to President Biden's border crisis, with the end of Title 42 just days away and record-high illegal border crossings along the Texas-Mexico border.

"There have been recent reports that non-governmental organizations may have assisted with illegal border crossings near El Paso," reads the letter. "We further understand NGOs may be engaged in unlawfully orchestrating other border crossings through activities on both sides of the border, including in sectors other than El Paso. In light of these reports, I am calling on the Texas Attorney General’s Office to initiate an investigation into the role of NGOs in planning and facilitating the illegal transportation of illegal immigrants across our borders. In addition, I stand ready to work with you to craft any sensible legislative solutions your office may propose that are aimed at solving the ongoing border crisis and the role that NGOs may play in encouraging it."

In a social media post this week, Governor Abbott wrote that more border wall will be constructed in January 2023 after negotiating with private property owners. Texas continues working collaboratively with border communities, private landowners, and other stakeholders to build the Texas border wall and stem the flow of illegal immigration and transnational criminal activity into Texas.

Today, Governor Abbott received a briefing from Operation Lone Star agency leaders and toured the increased assets along the border ahead of President Biden’s reckless decision to end Title 42 expulsions next week on December 21.

The Governor was joined for the briefing by Texas Military Department (TMD) Adjutant General Thomas Suelzer, DPS Director Steve McCraw, TMD Major General Win Burkett, and other Operation Lone Star leadership and local officials. During the briefing, the Governor and law enforcement officials discussed how the State of Texas will continue enhancing border security efforts and strategies to address the drastic spike of an estimated 18,000 illegal crossings per day expected next week following the end of Title 42.

The Governor also visited Texas National Guard soldiers and DPS troopers stationed along the border for Operation Lone Star and thanked them for their service to the people Texas to secure the border and keep our communities safe.

Fox News followed DPS troopers conducting back-to-back human smuggling busts in La Joya. In one instance, troopers pursued a vehicle until a smuggler and several illegal immigrants bailed into a residential neighborhood. Troopers then chased and tackled the illegal immigrants before returning to the vehicle. They found even more illegal immigrants in the truck, with some wearing wristbands given by cartels to track who they are smuggling. 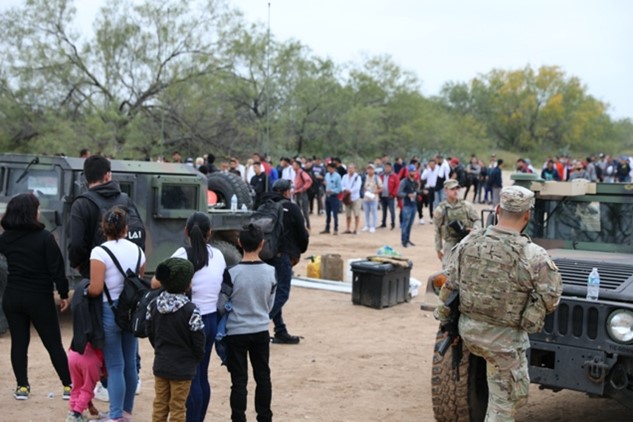