Since the launch of Operation Lone Star, the multi-agency effort has led to over 333,000 migrant apprehensions and more than 22,000 criminal arrests, with more than 20,000 felony charges reported. In the fight against fentanyl, DPS has seized over 354 million lethal doses of fentanyl during this border mission.

As part of Operation Lone Star, DPS recently launched a new elite border taskforce that includes tracking K9s and drone operators to detect, track down, and apprehend the record numbers of gotaways into the United States. The taskforce will also gather intelligence, disrupt human smuggling, and identify scouts. More than 73,000 gotaways were reported in November alone, and in fiscal year 2022 there were nearly 600,000 gotaways—a stark increase from about 389,000 gotaways in fiscal year 2021.

This week, Fox News’ Bill Melugin embedded with the new DPS unit and one morning witnessed the arrest of roughly 50 illegal immigrants actively looking to evade law enforcement by sneaking through the brush near La Joya and Mission.

Last month, Governor Abbott ordered DPS and the Texas Military Department to expand their unprecedented efforts to combat the growing illegal immigration along the Texas-Mexico border.

DPS Lt. Chris Olivarez spoke with NewsNation about the record number of gotaways reported at the border last month and a new initiative to address the border crisis through a special joint taskforce. In conjunction with Operation Lone Star, this taskforce is tracking, detecting, and apprehending illegal immigrants in the Rio Grande Valley as the number of illegal immigrants attempting to evade law enforcement continues to climb.

“We are sending a message that we do have extra manpower working with Border Patrol,” said Lt. Olivarez. “We’ve made an impact, even in just the small area we’ve been working. We’ve been able to make apprehensions, where otherwise there would be no manpower there and these would have been gotaways.”

DPS told NewsNation it will continue to create and implement specialized teams and taskforces to address the border crisis.

“We know for a fact that Mexican drug cartels control the border, who comes across and what drugs come across,” said Lt. Olivarez. “The federal government needs to designate these cartels for what they are, foreign terrorist organizations. Governor Abbott did it, and yet we’re still wondering why the federal government has not cracked down on these organizations to stop the flow of chemical precursors [of fentanyl] from China going into Mexico so they can develop this deadly poison and then smuggle it into the United States.”

Last week, the Texas National Guard deployed 10 M113 armored personnel carriers to strategic locations in five counties along the border as part of Operation Lone Star. The M113s bolster the safety of soldiers amid escalating violence in the border region. On Saturday, soldiers sought cover in an M113 after receiving gunfire from unidentified individuals on the other side of the river.

During a commercial vehicle safety inspection of an 18-wheeler in Jim Hogg County, DPS troopers discovered the driver was smuggling 15 illegal immigrants, including a child, concealed inside a gravel trailer. The driver from San Antonio was charged with human smuggling, and all illegal immigrants were referred to Border Patrol.

A human smuggler led DPS troopers on a high-speed pursuit on U.S. 83 in Starr County. During the pursuit, the driver and several illegal immigrants bailed out toward the brush. One illegal immigrant was located inside the trunk of the car and referred to Border Patrol. 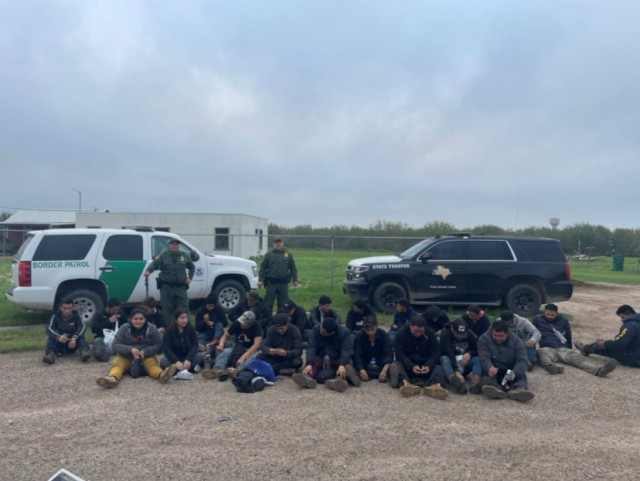