Since the launch of Operation Lone Star, the multi-agency effort has led to 314,000 migrant apprehensions and more than 20,800 criminal arrests, with more than 18,400 felony charges reported. In the fight against fentanyl, DPS has seized over 337 million lethal doses of fentanyl during this border mission.

Governor Abbott joined Fox News’ Jesse Watters this week to discuss the transnational criminal activity and increasing threats coming across the Texas-Mexico border. Because President Biden continues to turn a blind eye to the crisis at the border, in the past year an all-time record has been set with more than 2.2 million people crossing the border illegally. Many are victims of human trafficking or have lost their lives traveling to the border and attempting to cross.

“The United Nations declared the border between the United States and Mexico—Biden’s border—the most dangerous crossing in the entire world,” said Governor Abbott. “If the Biden Administration did what I just did a few weeks ago, declaring the cartels as terrorist organizations, it would trigger a federal law that would allow him to go into [the cartels’] bank accounts and get those billions of dollars the cartels are making off this crisis.”

DPS Lt. Chris Olivarez joined Fox News this week to highlight the urgent need for the Biden Administration to step up and address the ongoing border crisis. Because residents along the southern border have been abandoned by federal authorities, Texas has filled in the dangerous gaps left by President Biden’s failure on border security. DPS expects to continue seeing mass migration along the southern border until the Biden Administration acknowledges and addresses the rampant crisis.

“We’ve reached a breaking point with this current border crisis, and quite frankly, we reached it last year,” said Lt. Olivarez. “It’s unacceptable how long this has been going on. We’re still continuing to see large groups come across and more human smuggling events. The federal government has completely neglected the American people and the people who reside in these border communities.”

Texas National Guard soldiers assisted with the apprehension of 717 illegal immigrants crossing the Rio Grande River on October 4. Soldiers stationed at the international bridge in Eagle Pass communicated with Border Patrol agents to determine the location of illegal immigrant attempts to cross into Texas and were able to stop the large group before it entered Texas.

The group of illegal immigrants was turned over to Border Patrol for transportation and processing.

“We’re seeing tragic events play out across the southern border, and it’s because these transnational criminal organizations that are recruiting young drivers,” said Lt. Olivarez. “Every person who comes across that river, whether they be an adult or child, is paying a cartel member to get across, which enriches these cartels. Human smuggling is now a multibillion-dollar trade because of this border crisis.”

Newsmax border correspondent Jaeson Jones joined DPS to report on President Biden’s border crisis and how Mexican drug cartels employ drone technology as part of their human and drug smuggling enterprises. While embedded with DPS on a night patrol, troopers encountered a group of about 28 illegal immigrants that had just crossed the border while another group of roughly 10 drug traffickers waited for an opportune time to smuggle bundles of drugs across the border.

“What you didn’t see and what we learned is that the Mexican cartels had several drones that had flown over from Mexico and were actually above our helicopter as we’re assisting the U.S. Border Patrol,” said the DPS airman accompanying Jones. “That creates a really big challenge for us, because the FAA requires us to see and avoid other air traffic. These cartels are running dark ship drones, which means no light, and it’s creating real havoc for the law enforcement helicopters down here.”

As part of Operation Lone Star, a DPS trooper conducted a traffic stop on an SUV for equipment violations on Interstate 10 in El Paso. During the roadside interview, the trooper detected the odor of marijuana and conducted a search of the vehicle, which resulted in the discovery of a pistol, marijuana, cocaine, methamphetamine, fentanyl pills, and alprazolam pills.

The driver had three active warrants in Texas and New Mexico and was charged and booked into the El Paso County Jail.

DPS Brush Teams arrested an illegal immigrant for criminal trespass after he crossed onto a private ranch in Maverick County. A criminal history check indicated that Wilmer Castro-Murillo of Honduras had an active Interpol warrant for murder in his home country.

The Texas National Guard was deployed to the Texas-Mexico border by Governor Abbott in March 2021 as part of Operation Lone Star, sending thousands of soldiers to the border and across the state in support of the mission. Engineer assets have constructed over 105 miles of temporary border fence and concertina wire to deter illegal activity.

“We’re an integral part of border security,” said one soldier.

As part of Governor Abbott’s Stash House Reward Program, DPS received an anonymous tip that led to the discovery of a stash house hiding 10 illegal immigrants in Webb County on Tuesday. The illegal immigrants were found in a vacant field next to the home in east Laredo attempting to conceal themselves.

In August, Governor Abbott announced that his Public Safety Office, in conjunction with DPS, had increased the reward amount of up to $5,000 for information leading to the identification of stash houses used in transnational criminal activity. To be eligible for the cash rewards, anyone with information on stash houses can provide anonymous tips in one of the following ways:

A human smuggler driving a utility truck led DPS troopers on a vehicle pursuit in Kingsville. During the pursuit, the driver and several illegal immigrants bailed out into the brush. A total of 15 illegal immigrants were referred to Border Patrol. 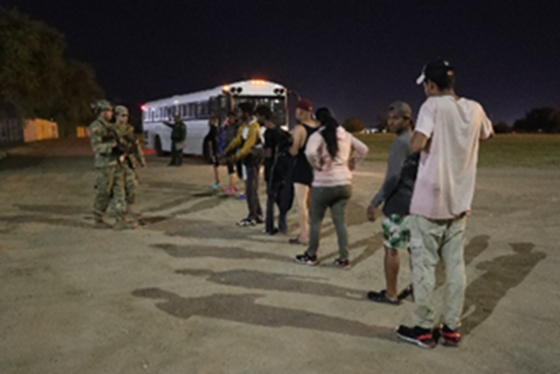