Governor Greg Abbott, the Texas Department of Public Safety (DPS), and the Texas National Guard are continuing to work together to secure the border, stop the smuggling of drugs, weapons, and people into Texas, and prevent, detect, and interdict transnational criminal behavior between ports of entry in response to the federal government's unwillingness to address the border crisis.

Since the launch of Operation Lone Star, multi-agency efforts have led to more than 236,000 migrant apprehensions, along with almost 14,000 criminal arrests — and more than 11,300 felony charges. Over 3,800 weapons and almost $30 million in currency have been seized. In the fight against fentanyl, DPS has seized over 300 million lethal doses throughout the state.

Governor Abbott spoke with Tucker Carlson on the State of Texas' efforts to secure the border in the wake of Biden's continued inaction.

Last week, Governor Abbott signed four memoranda of understanding (MOU) with the governors of Nuevo León, Tamaulipas, Chihuahua, and Coahuila. These MOUs enhance border security measures that will prevent illegal immigration from Mexico to Texas and improve the flow of traffic across international bridges. The agreements went into effect immediately.

WATCH: DPS Warns Border Crisis Will 'Escalate' With Lifting Of Title 42: 'The Message Is Out'

DPS Lt. Christopher Olivarez joined 'America's Newsroom' to discuss the latest on the border crisis and the implications of rescinding the COVID-related policy.

Fox News' Sara Carter joined DPS at the border, where they encountered a woman abandoned by smugglers.

DPS Troopers rescued 21 illegal immigrants who were being smuggled inside wooden crates earlier this month. The driver, a confirmed criminal gang member and passenger were arrested for human smuggling.

Earlier this month in Hidalgo County, DPS conducted a traffic stop on a vehicle towing a gooseneck trailer carrying hay bales and cattle. It was discovered that the driver was attempting to smuggle 12 illegal immigrants in a hidden compartment within the hay bales. One of the immigrants is a confirmed Paisa gang member and stash house coordinator. A total of three suspects were arrested for human smuggling and organized crime.

CBS News rides along with DPS to learn more about the State of Texas' efforts to secure the border and keep Texans safe.

Task Force East drawbridge teams were awarded a DPS Unit Citation at their headquarters in Austin on April 14. This operation was part of a joint mission within Operation Lone Star.

Operation Lone Star commander Brig. Gen. Win Burkett toured troop base camps along the border this past week. Burkett, who recently took command of both the TXARNG’s 36th Infantry Division and OLS, met with multiple task forces at various locations near Laredo, Texas. The task forces shared a snapshot of their ongoing operations and current living conditions to provide the new commander with accurate information as he continues his initial assessment of the mission.

Texas Guardsmen tracked down and apprehend three illegal migrants smuggling narcotics on April 14, 2022, near Brownsville. The effort led to the arrest of three men, including one whom had an outstanding warrant for narcotics, as well as the seizure of 140.2 pounds of cannabis. 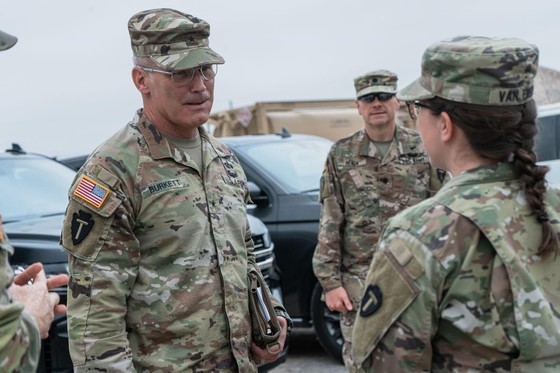