Since the launch of Operation Lone Star, the multi-agency effort has led to 306,400 migrant apprehensions and more than 20,100 criminal arrests, with more than 17,600 felony charges reported. In the fight against fentanyl, DPS has seized over 336.3 million lethal doses of fentanyl during this border mission.

“Fentanyl is a clandestine killer, and Texans are falling victim to the Mexican cartels that are producing it,” said Governor Abbott. “Cartels are terrorists, and it’s time we treated them that way. In order to save our country, particularly our next generation, we must do more to get fentanyl off our streets.”

With an 89% increase in fentanyl-related deaths reported in Texas in 2021 compared to 2020, Governor Abbott this week sent a letter to state agency leaders directing them to ramp up state efforts to combat the deadly fentanyl crisis impacting communities across Texas and the nation.

“Fentanyl’s potency and deceptiveness, combined with the federal government’s unwillingness to take border security seriously, pose a grave threat to Texans,” reads Governor Abbott's letter. “We must take all appropriate actions to inform Texans of this danger and prevent additional deaths.”

Ahead of the next legislative session, the Governor ordered state agencies to outline statutory changes, budget priorities, and other initiatives that will enhance the state’s ability to interdict the synthetic opioid, provide emergency overdose treatment, and expand substance abuse treatment programs. State agencies were also directed to begin coordinating efforts to raise awareness of fentanyl’s lethality and prevalence.

Governor Abbott: Affirming The Rule Of Law In A Nation Of Hopes And Dreams

In an op-ed for The Washington Times’ Immigration in 2022 special edition, Governor Abbott highlighted the unprecedented action he has taken to protect Texans against President Biden’s dangerous open border policies, including allocating more than $3 billion over the past 18 months for border security.

“Whether President Biden views the border crisis as Texas’ problem or it is just politically inconvenient for him to do his job, mass illegal immigration is a humanitarian crisis for those putting their lives in the hands of ruthless coyotes or smugglers and a national security crisis for all American,” writes Governor Abbott. “The crisis at the border is not for Texas or any other border state to handle alone. It is up to our nation’s leaders to stand up for the rule of law that makes America so exceptional.”

During a traffic stop in Laredo on Wednesday, DPS agents discovered 50 illegal immigrants riding in an 18-wheeler. In all, 37 adult males, 11 adult females, and two juveniles were referred to Border Patrol. One adult male U.S. citizen and one male illegal immigrant from Mexico were arrested for smuggling of persons.

DPS Sgt. Erick Estrada discussed with Laredo’s KGNS a recent trend the department is observing of rental homes being used as stash houses and DPS efforts to crack down on stash houses used to hide illegal immigrants, drugs, and weapons. DPS advises landlords to look out for red flags such as tenants paying in cash and offering multiple payments in advance.

”For the most part, what we found in these specific cases is the landlords are not directly involved," said Sgt. Estrada. "It’s directly with the tenant, with whoever is renting the property. People should be aware of who they are renting their property out to."

On Tuesday, DPS special agents found 43 illegal immigrants in a stash house in Webb County after noticing suspicious activity. Working with Border Patrol and Webb County Constables Pct. 2, DPS conducted a knock-and-talk and discovered the illegal immigrants, including 24 adult males, 17 adult females, and two juveniles. All were from Mexico, Guatemala, and Honduras and have been referred to Border Patrol.

The region is known to be heavily trafficked by cartel members, human smugglers, and drug smugglers. “We focus on apprehending small to medium-sized groups of illegal aliens and drug smugglers,” said 1st LT. Benjamin Pittman, the Alpha Company Commander of Task Force Center.

“We use any kind of real data that we have for the week and implement it and set it to the spots where a lot of illegal immigration is coming across,” said Sgt. 1st Class Stephen Mata. “We’re taking down criminals, and that’s the goal.”

“Joint agency inter-workings and shared information about real-time operations in the field lead to an increased success rate in apprehending migrants,” said Sgt. Chance Crosby, Task Force Eagle squad leader. “By working side by side, we are able to decrease response times to active sightings across border hotspots.” 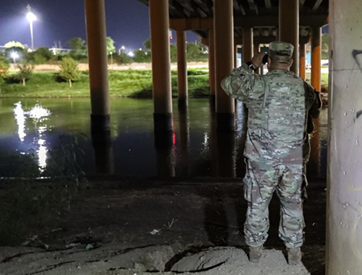