Operation Lone Star Gears Up For Potential Ending Of Title 42

Since the launch of Operation Lone Star, the multi-agency effort has led to over 336,000 migrant apprehensions and more than 23,000 criminal arrests, with more than 20,000 felony charges reported. In the fight against fentanyl, DPS has seized over 354 million lethal doses of fentanyl during this border mission.

This week, Governor Abbott demanded President Joe Biden immediately deploy federal assets to address the dire border crisis, particularly in the City of El Paso, as a dangerously cold polar vortex moves into Texas. In a letter to President Biden, the Governor highlights the humanitarian crisis caused by federal inaction to secure America's southern border that is putting the lives of migrants at risk, with thousands illegally crossing into Texas every day and those numbers expected to increase if Title 42 expulsions end.

“These communities and the state are ill-equipped to do the job assigned to the federal government—house the thousands of migrants flooding into the country every day,” reads the letter. “With perilous temperatures moving into the area, many of these migrants are at risk of freezing to death on city streets. The need to address this crisis is not the job of border states like Texas. Instead, the U.S. Constitution dictates that it is your job, Mr. President, to defend the borders of our country, regulate our nation’s immigration, and manage those who seek refuge here.”

“Now under President Biden, America has far more record-setting numbers of people coming across the border than ever before,” said Governor Abbott. “Texas is having to step up and take extraordinary efforts that have never been undertaken by any state in the history of the United States to try to secure our border.”

With the future of Title 42 uncertain, Governor Abbott spoke with Fox News’ America’s Newsroom this week to highlight the urgent need for the Biden Administration to enact meaningful border security measures. Texas border communities are already experiencing a record-breaking influx of illegal immigration, and if Title 42 is permanently lifted those numbers are expected to increase dramatically.

“Texas is left to pick up the pieces of the border disaster caused by the Biden Administration,” said Governor Abbott. “It was only after President Biden came into office and enacted his open border policies that we have an all-time record for the number of people coming across the border illegally.”

“We’re putting the wire out as a barrier to drive the deterrence message home,” said Major General Win Burkett, Operation Lone Star director of operations. “You cannot just cross anywhere you want. We’re focused on deterrence, on demonstrating that we can be where we need to be anywhere on this border. We can surge in a very short amount of time.”

DPS Lt. Chris Olivarez spoke with Fox News’ Neil Cavuto about the record number of illegal immigrants attempting to cross the border as the Biden Administration prepares to end Title 42. After President Biden dismantled every other effective border security policy enacted by President Trump, the crisis at the border has reached historic proportions.

“The federal government can throw billions of dollars at border security, but nothing is going to curb the flow of mass migration and stop the criminal activity unless they follow through on the policies that were working and effective,” said Lt. Olivarez. “If you look at what Governor Abbott has done from the very beginning—with Operation Lone Star, all the Executive Orders, and all the strategies he’s put in place—he didn’t just talk about it, he did it. There was a plan of action. The federal government talks about strategy and plans, but nothing is being done, and it gets worse every single month.”

As cities across the nation brace for massive groups illegally crossing the border into America, Operation Lone Star partners along the border are calling for meaningful federal action to address the crisis. DPS Lt. Olivarez spoke with Fox News’ Harris Faulkner about the steep rise in transnational criminal activity that will also occur if Title 42 is lifted.

“There’s been a significant increase in human smuggling, especially in the Del Rio sector,” said Lt. Olivarez. “One thing that’s very concerning to us in Texas is that when Title 42 is lifted, we’re going to see a mass flow of migration that we’ve never seen before. Mexican cartels use that to their advantage—that all the focus is going to be on these mass groups coming across the border and it’s going to leave miles of border unpatrolled.”

DPS’ Aviation Operations Division apprehended three illegal immigrants in Culberson County who were smuggling 3 pounds of fentanyl—or roughly 1.3 million lethal doses—and nearly 200 pounds of marijuana. The smugglers from Honduras, one of whom was a 14-year-old, were trying to avoid detection by walking through the mountains and desolate terrain.

As a DPS trooper attempted to stop a Dodge Durango in Hidalgo County, a Land Rover blocked the trooper and a group of illegal immigrants bailed out from the Durango. The trooper was eventually able to stop the Durango and arrest the driver for human smuggling. The driver of the Land Rover was also stopped and arrested.

A DPS trooper stopped an SUV in Cameron County for a traffic violation, and the trooper determined the driver was providing false identifying information during the roadside interview. The trooper attempted to arrest the driver when he pulled away and fled on foot. The trooper chased the driver on foot and was able to arrest him after he resisted arrest again.

The driver was arrested and charged with failure to identify, evading arrest, and resisting arrest. It was discovered he was wanted by the Cameron County Sheriff’s Office for robbery, and further investigation revealed he is associated with the Gulf Cartel. 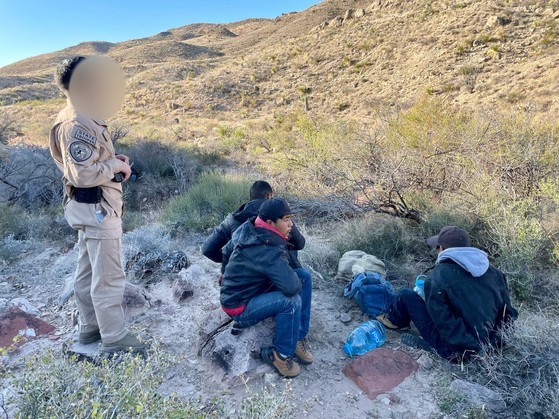