Since the launch of Operation Lone Star, the multi-agency effort has led to over 342,000 illegal immigrant apprehensions and more than 23,000 criminal arrests, with more than 21,000 felony charges reported. In the fight against fentanyl, DPS has seized over 356 million lethal doses of fentanyl during this border mission.

Governor Abbott hand-delivered a letter to President Joe Biden on Sunday, upon his arrival in El Paso for his first trip to the border, calling on him to do his job and secure the border by enforcing federal immigration laws.

In the letter, the Governor provided five specific actions the President can immediately take to secure the border and restore order to an out-of-control immigration crisis.

"This chaos is the direct result of your failure to enforce the immigration laws that Congress enacted," reads the letter. "Your open-border policies have emboldened the cartels, who grow wealthy by trafficking deadly fentanyl and even human beings. Texans are paying an especially high price for your failure, sometimes with their very lives, as local leaders from your own party will tell you if given the chance. On behalf of all Americans, I implore you: Secure our border by enforcing Congress’s immigration laws."

Governor Abbott spoke with Fox News’ Harris Faulkner on Monday after hand-delivering a letter to President Biden during his first visit to the border the day before. After greeting the President on the tarmac in El Paso, the Governor detailed existing policies the President must enforce to finally start addressing the chaos his open border polices have created.

“I specifically pointed to several issues in the letter that I wanted him to focus on,” said Governor Abbott. “These points that I have laid out—about ending catch-and-release, detaining people who are coming across the border illegally, turning back people who have crossed the border illegally—all of those are things the President and the United States already have the legal authority to do but they are not doing. Until they step up and start doing this, all these other things they are doing are nothing more than a dog and pony show, and it is not going to stop anybody from coming across the border illegally.”

Governor Abbott joined Fox News’ Maria Bartiromo on Sunday ahead of President Biden’s first-ever visit to America’s southern border for a wide-ranging discussion of the actions the President must take to combat the ongoing border crisis. The Governor highlighted the effectiveness of Texas installing shipping containers and razor wire as barriers near El Paso to stem the massive influx of illegal immigration.

“This visit is about two years too late and about $20 billion short of what needs to be done,” said Governor Abbott. “President Biden’s plan is not border enforcement; it’s border enticement. We have very simple solutions the Biden Administration could apply to do something about this if they wanted to. But they really don’t care about stopping illegal immigration. Biden is there today to look at a sanitized El Paso so he can help and aid the illegal immigrants as opposed to stopping them from coming into our country.”

Governor Abbott on Thursday discussed with CNN's Jake Tapper the historic border crisis that President Biden has created by not enforcing current U.S. immigration laws. With millions of illegal immigrants attempting to cross the southern border from over 150 countries and more suspected terrorist crossings than ever before, Governor Abbott pointed out that the President has ignored his eight letters calling on the administration to enforce immigration laws and secure the border.

“[President Biden] has refused to provide any assistance whatsoever,” said Governor Abbott. “All on deaf ears. Texas has been left alone as some frontier outpost for us to have to grapple with, ourselves, the record-breaking volume of millions of people coming across the border a year.”

NewsNation border correspondent Robert Sherman embedded with DPS in the Rio Grande Valley and witnessed a high-speed vehicle chase of a human smuggler. According to local law enforcement, illegal border crossings have gone down since Title 42 was extended last month, however, human smuggling is on the rise as a highly sophisticated, lucrative cartel-led business.

“This is every day for not just us on the stateside, but also Border Patrol and local law enforcement who work here in this area,” said DPS Lt. Chris Olivarez. “They use a lot of scouting, using radios or cell phones. They’re always communicating with each other—the driver communicating with scouts here on the U.S. side. It’s very coordinated.”

The smuggler DPS apprehended during the ridealong admitted to being paid about $150 a person to smuggle the illegal immigrants to a nearby stash house, where they would lie low for a few days before another smuggler would pick them up and take them further north.

Ahead of President Biden’s visit to El Paso last weekend, Fox News spoke with DPS West Texas Regional Director Joe Sanchez about the ongoing crisis at the border. More than 2,000 migrants were recently relocated after camping out along one stretch of the border, which is now fortified with razor wire put up by DPS and the Texas National Guard. DPS also described the cartel-driven violence and safety issues caused by the Biden Administration’s chaotic border policies.

“A lot of Americans don’t realize what’s going on down here at the border, especially how it’s impacted our local communities,” said Regional Director Sanchez. “This migration has created a lot of devastation for the local communities. [President Biden] needs to focus on the policy, because we need to know who is coming into our country. There needs to be a better process; you can’t just freely come across.”

The Texas National Guard expanded its Operation Lone Star mission to El Paso in response to the unprecedented number of illegal border crossings in the area. The Texas Air National Guard provided four C-130J Hercules aircraft to expedite movement of personnel and vehicles to the far western region, with tactical troop movements also occurring across Texas.

“I am so impressed with the OLS staff, as well as with soldiers from Task Force West,” said Maj. Gen. Ronald “Win” Burkett, Operation Lone Star Commanding Officer. “Over 400 personnel and 40 vehicles were repositioned in El Paso within a 72-hour time frame.”

El Paso operations are now a continuing piece of Governor Abbott’s efforts to secure the Texas-Mexico border. The region will have more than 600 troops and 100 military vehicles to support law enforcement partners in blocking and repelling illegal crossings and interdicting transnational criminal activity.

DPS troopers stopped a transit van in Kinney County and discovered six illegal immigrants from Mexico concealed in the cargo area. The driver, from Houston, said he was being paid $2,000 to smuggle them. The driver was arrested and charged, and the illegal immigrants were referred to Border Patrol.

DPS troopers were led on a vehicle pursuit of a Nissan truck in Mission earlier this week. The driver, from Mexico, bailed out of the vehicle in a neighborhood and ran toward the brush. It was discovered he was smuggling 14 illegal immigrants from Mexico. With assistance from a tracking K-9, the driver was apprehended about 2 miles from the bailout. He was charged with evading arrest and smuggling of persons. 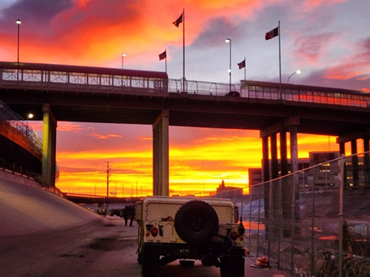