Since the launch of Operation Lone Star, the multi-agency effort has led to over 343,000 illegal immigrant apprehensions and more than 23,000 criminal arrests, with more than 21,000 felony charges reported. In the fight against fentanyl, DPS has seized over 356 million lethal doses of fentanyl during this border mission.

“It’s a head-in-the-sand approach, both by the media as well as the Biden Administration,” said Governor Abbott. “Despite Texas’ record efforts, the problem is still going to exist as long as we have a federal government that has an open border policy.”

Governor Abbott also noted President Biden has not responded to his most recent letter that was hand-delivered during the President’s sanitized visit to El Paso earlier this month. The letter lays out five tangible actions President Biden can take immediately to secure the border and stop the historic flood of illegal immigrants.

DPS Lt. Chris Olivarez spoke with Fox News’ Neil Cavuto this week about the impact of Texas’ heightened border security efforts in El Paso, such as razor wire and shipping container barriers, which helped stem the influx of illegal crossings after they hit over 2,000 illegal immigrants a day in the area. Law enforcement is also working to stop Mexican cartels from smuggling people, drugs, and weapons between ports of entry.

“Just like the way we change our tactics and try to expand operations based on threats, the Mexican cartels are doing the same thing,” said Lt. Olivarez. “They want to expand their criminal network and maximize their profits. Having a policy from the federal government and also putting pressure on Mexico to help us stem the flow of people coming across is when we will see real change.”

DPS troopers are observing criminal organizations’ increasing reliance on drones to conduct surveillance on Texas law enforcement along the border. DPS Lt. Chris Olivarez said they are witnessing drones being used on a daily basis.

"Once they’re able to find a safe area, then they’ll bring across people," said Lt. Olivarez. "They’re able to see a much broader area of the border to see where law enforcement is. They use that to their advantage, and it works. It’s a cat-and-mouse game."

Two juvenile smugglers led DPS troopers on a high-speed pursuit in Val Verde County. Three illegal immigrants bailed out on the side of the road, and the pursuit continued until the driver and passenger from Del Rio also eventually bailed out and ran behind a residence. Both were arrested and charged with evading arrest and human smuggling.

DPS troopers stopped a vehicle on U.S. 277 in Val Verde County, and during the interview both passengers bailed out and attempted to flee. They were apprehended and charged with evading arrest. The troopers discovered the driver was smuggling two illegal immigrants in the trunk and referred them to Border Patrol. The driver was charged with human smuggling, possession of marijuana, possession of methamphetamine, and unlawful carrying of a weapon.

Texas National Guard soldiers located and apprehended illegal trespassers on a private ranch earlier this month after they activated sensors used by law enforcement. After setting up a perimeter, soldiers were able to apprehend the trespassers, who were referred to law enforcement.

"We are definitely helping out by preventing the flow of illegal aliens, and we are also helping stem the flow of drugs by identifying cartel members trying to come across the border,” said a master sergeant in charge of task force operations. “Our partners—Department of Public Safety troopers and Border Patrol agents—continually let us know that our presence helps with apprehensions and the security of our border.”

DPS’ brush team arrested two illegal immigrants from Mexico for criminal trespassing on a private ranch in Maverick County. Both had multiple illegal entries and deportations and are suspected of having gang affiliations. 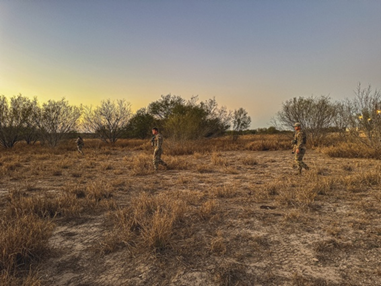