Since the launch of Operation Lone Star, the multi-agency effort has led to over 340,000 illegal immigrant apprehensions and more than 23,000 criminal arrests, with more than 21,000 felony charges reported. In the fight against fentanyl, DPS has seized over 355 million lethal doses of fentanyl during this border mission.

Following news reports that President Joe Biden plans to visit the southern border for the first time and amid the escalating border crisis, Governor Abbott joined Fox News to highlight the insincerity and inadequacy of the President's recent border announcement. President Biden has not provided any concrete solutions to combat the record levels of illegal immigration and transnational criminal activity pouring across the border. Governor Abbott emphasized how the President is not only not enforcing existing immigration laws, but he's openly violating existing federal law, which is enticing more people to enter our country illegally.

"It's about time Joe Biden went down to the border and to see the chaos he himself created," said Governor Abbott. "Americans are angry and frustrated, and it's time for Biden to lay out details about how he will stop illegal immigration coming across our border."

While the Supreme Court’s decision in late December to leave Title 42 in place comes as a relief for Operation Lone Star partners working to secure the southern border, DPS Lt. Olivarez tells Fox News that the historic numbers of illegal border crossings this past year still occurred under Title 42. With the U.S. Supreme Court expected to hear arguments on Title 42 in February, Lt. Olivarez tells Fox News the federal government is under increased pressure to come up with a policy to replace it.

“Until then, we’re still seeing record numbers every month, not just in terms of encounters, but also gotaways, drugs that are coming across our borders, unaccompanied children, and also the number of deaths that have taken place,” said Lt. Olivarez. “Everything was working prior to 2021. We know the Remain in Mexico policy was very effective in maintaining to flow of people coming across. It is the federal government’s sole responsibility to protect the country and the border, but they’re not doing it right now.

DPS Lt. Chris Olivarez joined Fox News to provide an update on the historic border crisis created by President Biden's policies, especially as the administration has yet to offer a solution if and when Title 42 is permanently lifted. In the absence of federal action on border security, DPS and the Texas National Guard are employing all available tools and strategies to address the unprecedented influx of illegal immigration into America.

“The State of Texas continues to be at the forefront of this border crisis,” said Lt. Olivarez. “Contrary to what the federal government is doing, we are trying to make an impact by trying to stop what is taking place. We have so many people coming across our border—just over 16,000 over the holiday weekend, with 14,000 who were released. This is a self-inflicted crisis, a national security crisis, and a humanitarian crisis.”

DPS troopers stopped a tractor semi-trailer on U.S. 77 in Kenedy County, and during the search troopers discovered 18 illegal immigrants, including a juvenile, hidden inside under a tarp. The driver was arrested and charged with human smuggling. All 18 illegal immigrants were referred to Border Patrol.

Human smugglers led DPS troopers on a high-speed vehicle pursuit, reaching upward of 120 miles per hour in Kinney County late last month. The driver lost control of the car and hit a light pole at a Border Patrol checkpoint. The driver and passenger, both from Austin, told investigators they were being paid $9,000 to smuggle three illegal immigrants from Honduras to Austin. Both human smugglers were arrested and charged.

A specialized Operation Lone Star Task Force arrested two guides last week in the Rio Grande Valley. The two guides crossed six illegal immigrants from Mexico into the U.S. One of the guides had a record of 11 apprehensions and illegal entries by federal agents but no prosecutions. Both men were arrested and charged with human smuggling.

Texas National Guard soldiers recently assisted law enforcement with the detection and communication needed to apprehend a group of illegal trespassers near Laredo. 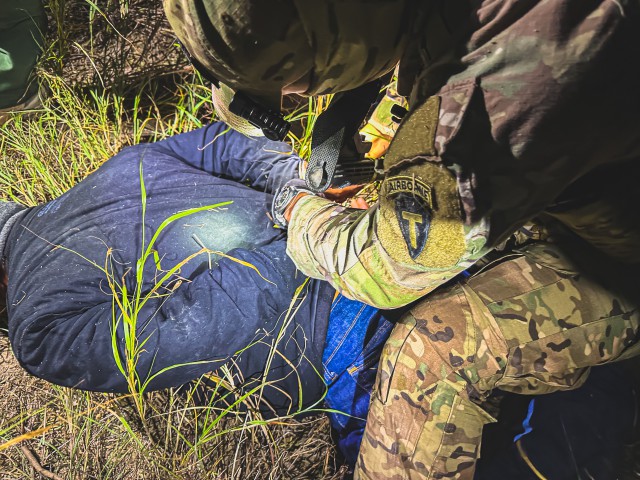