Since the launch of Operation Lone Star, the multi-agency effort has led to more than 300,800 migrant apprehensions and more than 19,400 criminal arrests, with more than 16,800 felony charges reported. In the fight against fentanyl, DPS has seized over 335 million lethal doses of fentanyl during this border mission.

Texas has also bused over 7,600 migrants to our nation's capital since April and over 1,900 migrants to New York City since August 5. On Wednesday, the first two buses with over 95 migrants from Texas arrived in Chicago, Illinois. The busing mission is providing much-needed relief to our overwhelmed border communities.

On Wednesday, Governor Abbott announced the first group of migrants bused from Texas had arrived in sanctuary city Chicago, Illinois. In addition to Washington, D.C. and New York City, Chicago will now be a drop-off location for the busing strategy as part of the Governor’s response to President Biden’s open border policies overwhelming border communities in Texas.

“President Biden's inaction at our southern border continues putting the lives of Texans—and Americans—at risk and is overwhelming our communities," said Governor Abbott. “Mayor Lightfoot loves to tout the responsibility of her city to welcome all regardless of legal status, and I look forward to seeing this responsibility in action as these migrants receive resources from a sanctuary city with the capacity to serve them."

Read more about the bused migrant arrivals to Chicago.

According to data released August 15 by U.S. Customs and Border Protection, more than 80 terrorists on the Terrorist Watchlist have been encountered along the southern border since President Biden took office. For fiscal year 2022 so far through July, 66 non-U.S. individuals on the watchlist have been encountered by Border Patrol agents between points of entry, more than fiscal years 2017-2021 combined.

“[President Biden’s] refusal to secure the border is a direct threat to our national security,” wrote Governor Abbott. “Texas is stepping up to protect Americans from these dangerous criminals.”

DPS Lt. Chris Olivarez joined Fox News’ Neil Cavuto this week to discuss the unprecedented actions Governor Abbott has had to take to compensate for President Biden’s continued refusal to secure the southern border, including busing migrants to three different sanctuary cities with the resources to handle the influx of people coming across the border.

“We have to look at why we have this situation at the border and why we are experiencing the number of immigrants coming across, this many gotaways and drugs,” said Lt. Olivarez. “The federal government has failed to enact any policies that were effective prior to 2021. The State of Texas has taken on this responsibly to secure the border because the federal government has failed to do its part to protect the border and the entire country.”

"As soon as we apprehended the individual and looked across the street, we saw two more individuals and were able to apprehend those individuals as well,” said Staff Sgt. Joel Martinez. The soldiers notified Customs and Border Protection agents of the location and number of illegal immigrants.

On Wednesday, DPS Lt. Chris Olivarez discussed with Fox Business the recorded July 28 deposition given by U.S. Customs and Border Protection Chief Raul Ortiz, in which he admits that under President Biden's 'no consequences' policy, illegal immigrants perceive they will be able to enter and remain in the country.

“The reason why we’re seeing such an unprecedented number of illegal immigrants coming across our borders is because there’s no consequences, and we’ve known that from the very beginning,” said Lt. Olivarez. “The federal government has completely dismantled every single policy that was working at slowing down mass migration prior to 2021 and every tool that was necessary for law enforcement to do its job to secure the border.”

On Wednesday night, a DPS pilot stopped a human smuggling attempt at the South Texas International Airport in Edinburg after conducting a ramp check on a Gulf Stream IV plane when he suspected it was being used in human smuggling. When the DPS pilot requested identification from the individuals, all tried to flee. The pilot was struck by an SUV driven by one of the two smugglers, sustaining minor wounds.

DPS troopers and special agents were able to stop both drivers and determine they were attempting to smuggle 13 illegal immigrants by chartering a plane to Houston. Eight male and five female illegal immigrants were referred to Border Patrol.

A Texas National Guard soldier describes recent apprehensions along the Texas-Mexico border, in which illegal immigrants cross through private ranches and residential areas. Alongside other law enforcement agencies, soldiers are reducing cartel smuggling, human trafficking, and overall crime for Texans.

“Right next to these ranches are neighborhoods, and [illegal immigrants] will go into people’s backyards and their property,” said Texas National Guard Spc. Carino. “We’ve even had times when [illegal immigrants] have tried to make entrance into a home just to get away. So, we’re definitely making a difference.”

Texas National Guard soldiers worked alongside DPS troopers and Border Patrol agents to apprehend groups of illegal immigrants at the International Bridge in Shelby Park, Eagle Pass, on August 26. The bridge site has been turned into a hub for gathering illegal immigrants from the different capture points in the Eagle Pass area and preparing them for transit.

Both smugglers were apprehended and charged with evading arrest and smuggling of persons. The driver of the SUV was in possession of a stolen handgun and also charged with unlawful carry and theft of a firearm. 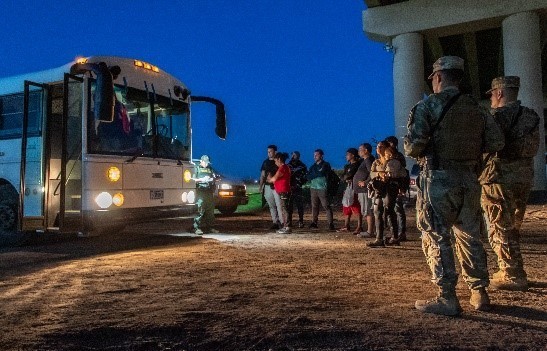