Since the launch of Operation Lone Star, the multi-agency effort has led to over 319,000 migrant apprehensions and more than 21,000 criminal arrests, with more than 18,700 felony charges reported. In the fight against fentanyl, DPS has seized over 346 million lethal doses of fentanyl during this border mission.

DPS Lt. Chris Olivarez joined National Border Patrol Council President Brandon Judd in a discussion with Fox News about the record number of migrant deaths at the southern border. Despite President Biden claiming his open border policies are humane, a record 856 migrant deaths were reported in fiscal year 2022—more than double the record previous to his administration and outpacing the record set in fiscal year 2021.

DPS troopers stopped a dump truck for a commercial vehicle inspection on Interstate 35 in La Salle County. During the stop, numerous illegal immigrants fled from the truck’s cargo area and ran to the brush. The driver, from Poteet, was arrested and charged with 84 counts of human smuggling, and the illegal immigrants from Guatemala and Mexico were referred to Border Patrol.

DPS Lt. Chris Olivarez spoke with Newsmax to highlight the unprecedented crisis currently unfolding along the southern border that includes a record number of illegal immigrants, gotaways, and illegal drug seizures under President Biden. Following historic low numbers of illegal border crossings under President Trump, a record 2.37 million encounters were reported at the southern border in fiscal year 2022, according to U.S. Customs and Border Protection.

“[DPS has] to do our part to protect our citizens here in Texas, as well as the entire country,” said Lt. Olivarez. “The men and women of DPS are on the frontlines of this crisis, trying to stop the criminals, the gotaways, and the drugs that are coming across our ports of entry. It’s very important that Governor Abbott launched Operation Lone Star, but it all falls back onto what the federal government is failing to do, and that is securing our border—a primary responsibility.”

WATCH: Lt. Olivarez Points Out Dangers Of Criminal Activity Along The Border

DPS Lt. Chris Olivarez updated Fox News about human smuggling cases his agency is seeing along the southern border, which are predominately from Mexico and the Northern Triangle countries of Guatemala, Honduras, and El Salvador. Lt. Olivarez also discussed the statewide anti-fentanyl campaign Governor Abbott launched in partnership with state agencies to keep Texans safe from the deadly opioid flooding across the border from Mexico.

“[DPS’] main focus has been on the criminal activity, the flow of drugs and human smuggling cases,” said Lt. Olivarez. “Aside from the enforcement of anti-fentanyl measures, the most important thing is education and awareness. Especially as Halloween approaches, we’re seeing rainbow-colored fentanyl that looks like candy. The state is trying to raise awareness in schools and colleges of this potentially lethal poison.”

Earlier this month, the Texas Military Department expanded its border response 400 miles west of its previous operation area to assist DPS troopers in stopping a major increase in illegal border crossings in the El Paso region. Soldiers contributed the techniques and equipment for detecting illegal crossings developed and refined over the course of the border mission.

The El Paso region’s surge in illegal activity can be traced to mass migration from South America, according to DPS El Paso regional director Jose Sanchez. The El Paso region also has two major arteries into the interior of the U.S., making it a particularly desirable crossing for drug smugglers and human traffickers.

“[The soldiers] do anything we ask,” said DPS Regional Director Sanchez. “I have never heard them say ‘no.’ They are always asking what they can do to help.”

A human smuggler led DPS troopers on a high-speed vehicle pursuit on U.S. 57 in Batesville County. The smuggler and the group of illegal immigrants bailed out and ran toward the brush. A total of six illegal immigrants were apprehended and referred to Border Patrol.

While patrolling a sector near Brownsville, a Texas National Guard soldier witnessed multiple illegal immigrants crossing the river. Soldiers apprehended the illegal immigrants and referred them to Border Patrol. Staff Sergeant Duncan Cate described the signs of illegal crossings that soldiers look for when patrolling areas along the border by vehicle and on foot.

“We look for footprints, signs in the brush or woods of laid-down grass, possible foot paths and areas of travel the individuals could possibly take,” said Staff Sergeant Cate, Task Force South. “We’re keeping Texans safe every day that we’re working down here—keeping illegal drugs and cartel members out of the state and ensuring everybody here in the State of Texas is safe.”

Texas National Guard engineers cleared 1.5 acres of dense overgrowth on land near the University of Texas, Rio Grande Valley campus that was known for criminal activity and illegal river crossings. The National Guard had been asked by the university’s police department to clear the area, which posed a safety issue for the campus and provided illegal immigrants places to hide.

“[Illegal immigrants] were able to get into some covered brush areas on campus,” said 1st Lt. Chris Daniel, 176th Engineer Brigade, part of Task Force East Engineers. “They used it as concealment and to cross the campus and enter vehicles, which took them into the interior of the United States. 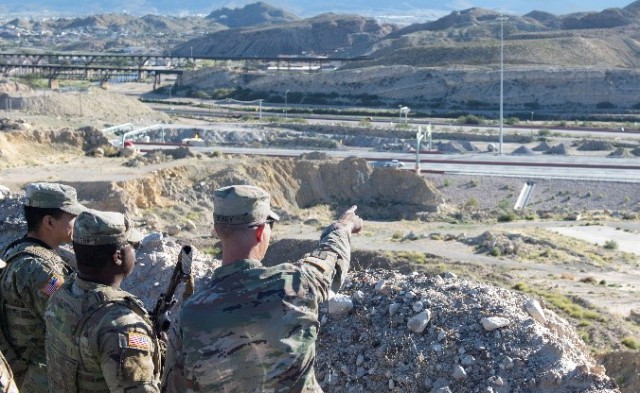