Thank you and welcome to your capitol of Texas.

Lieutenant Governor Patrick, Speaker Straus, elected officials, members of the Judiciary and the Legislature – and most especially, my fellow Texans.

Let me express my deep gratitude to the people of Texas for electing me Governor of the greatest state in America.

For fourteen years we the people have placed our trust in a man I am humbled to succeed. Along with his wife, Anita, he has been a faithful steward of the miracle that is Texas.  And I thank Rick Perry for his unwavering leadership.

The path that brought me here I could not have traveled alone. I share today with so many, starting with a woman of genuine warmth and character: My beautiful wife, Cecilia.

Texas has been the blending of cultures from across the globe even before we became our own nation. My wife represents that as she now has made Texas history as the first Hispanic First Lady in the history of our great state.

Cecilia and I share this day with our precious daughter, Audrey. Through your eyes we see the promise of the next generation of Texans.

I am honored to be Texas Governor. But the title that matters most to me is Dad.

Family is everything to us, as shown by the legions of family members with us today. I won’t name them all but I want all of them to know how grateful I am for their love and support.

I do want to recognize my father-in-law, Bill Phalen, and perhaps the most famous mother-in-law in Texas, mi madrina, Maria de la luz Segura Phalen.

I also want to recognize Gary Abbott. He’s my big brother and a retired Commander in the U.S. Navy where he served for 20 years.

Thanks to my brother Gary and to every man and woman who has ever worn the uniform of the United States Military. Their extraordinary service has secured our freedom to celebrate events of democracy like this today.

But, let’s face it, for me this moment was highly improbable. During this month 30 years ago I laid in a hospital bed recovering from injuries that broke my back and left me forever unable to walk.

The journey from that Houston hospital to the Texas Governorship was possible because of two powerful forces.

First is the grace of God. The Book of Matthew reminds us that With God all things are possible.

I am reminded of this when I hear a song that often plays in churches. It’s titled “You Raise Me Up”:

As I begin my Governorship I humbly ask for God’s continued grace and guidance, and I assure you: We will never forget that we remain One Nation Under God.

The other powerful force that allowed me to go from that Houston hospital to this Inauguration is that I had the good fortune to live in the great State of Texas.

Texas is the place where the improbable becomes the possible.

Many thought that it was improbable that Texans would overcome total devastation at the Alamo. And yet the unyielding drive for independence that has always filled the hearts of Texans led to victory at the battle of San Jacinto. And thus began the legend that Texas has become.

To this day Texas has been filled with legends who started humbly and succeeded spectacularly.

Where a boy like Dan Duncan who grew up dirt poor in East Texas started a business with two trucks and $10,000, but with hard work and true grit he went on to become one of the wealthiest Texans ever.

Where people like Colleen Barrett can climb the ladder from executive assistant to being listed as one of the most powerful women in America as President of Southwest Airlines.

Where a 13-year-old daughter of immigrants from Mexico worked nights in a drapery factory but never gave up on her dreams. Now Eva Guzman is the first Latina to serve as a Justice on the Texas Supreme Court.

And where a mother from Wichita Falls who, like so many mothers, chose to stay at home with her children to raise them and instill in them the values she thought important.

Although she’s now in Heaven with my Dad she’s no doubt proud that her timeless love and devotion inspired her son to become the 48th Governor of Texas.

I am living proof that we live in a state where a young man's life can literally be broken in half and yet he can still rise up and be governor of this great state.

As governor I will ensure Texas remains the state that provides that brand of opportunity for every Texan.

Texas truly is the land of opportunity, the place where anyone can achieve anything. But as great as Texas is there’s more we must do.

More for the families stuck in traffic.

More for parents who fear their child is falling behind in school.

More for our veterans who return broken from battle.

And we must do more for the millions of Texans who are tired of seeing our state sovereignty and the rule of law ignored by a federal government that refuses to secure our border.

As governor, I will ensure that we build the roads needed to keep Texas growing. That taxes raised for roads will be spent on roads. I will speed up our needed water projects, and I will secure our border.

As governor I will continue my legacy of pushing back against Washington if they spend too much, regulate too much, or violate our state sovereignty.

Any government that uses the guise of fairness to rob us of our freedom will get a uniquely Texan response: “come and take it.”

We Texans aren’t spoiling for a fight, but we won’t shrink from one if the cause is right.

For too long Washington has tried to remake America in its image. In Texas, we offer a different approach: We don’t put our trust in government; we put our trust in the people, and I will make sure we keep it that way.

We must never forget that government is the servant of the people – not the other way around.

I will also ensure that we keep Texas number one in the nation for job creation. We will promote policies that limit the growth of government – not the size of your dreams.

Yet we know too many still live on the fringe of opportunity. For them there is no solace in number one rankings that fail to touch their lives. I speak about children living in broken homes and struggling in broken schools.

On this point we cannot be captive to partisan arguments. Our children transcend politics. If Texas is to remain the leader at creating jobs we must become the leader at educating our children.

States are different. We excel by our mental might. Texas should be the source of the greatest minds the country has ever known.

These great minds will not be molded by a cookie-cutter approach to teaching. Instead they will be the product of great teachers who recognize the value and uniqueness of each student.

We will cultivate those teachers to educate those students to fill the growing job markets that will keep Texas the economic engine of America.

With us today is one of those teachers, my English teacher at Duncanville High School, Nancy Nickel.

She taught me more than how to read and write. She taught me to reach for my dreams. Thank you, Mrs. Nickel, and thanks to all of our tremendous teachers.

There is no place like Texas. We will ensure that remains just as true for the next generation as it does for those here today.

So, take a moment. Look at where you're standing or sitting right now. The ground beneath your feet is more than just grass or pavement.

It’s the soil that centuries ago bore the hopes and dreams of settlers who risked it all to come to a land that promised freedom and opportunity.

Texans are filled with hope because our lives have been infused with the perseverance and character that sprang from the tribulations faced by those who came before us.

And we must make sure this hollowed ground stirs the hopes and dreams of those who come after us.

We must keep Texas on a path that ensures that years from now people will stand on this very ground as grateful to this generation as we are to past generations.

To do that we must do more than work to find common ground to solve our problems.

So we must take the lead here in Texas – from Amarillo to McAllen, from El Paso to Beaumont. We must work together to ensure that even the future is bigger in Texas.

May God bless each and every of you, and may God forever bless the great State of Texas. 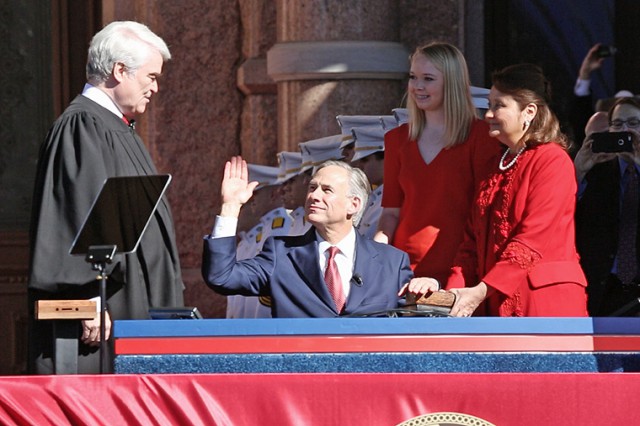