Governor Greg Abbott today addressed the Greater Houston Partnership Luncheon to share with local business leaders his plans for the state of Texas. Following his remarks, Governor Abbott visited the School at St. George Place where he toured prekindergarten classrooms and visited with teachers and administrators about the importance of elevating Texas’ Pre-K programs to be among the best in the nation.

Thank you, Bob Harvey. It’s good to be back in Houston.

I’m enjoying being your governor – I also relish the face that the path that took me there began here. I get to do bold things like chart a course for a greater Texas. But I do some simpler things like announcing a new first puppy for Texas. And I get to meet some genuine American heroes like I did last week. I met our nation’s oldest WWII Veteran – he’s 108 and a Texan – Mr. Richard Overton.

We never say thank you enough to those who’ve served our country. Because of those who fought on battlefields around the globe, we have the freedom to fight on the battleground of ideas in capitols like Austin. If there is anyone in the room today who has ever worn the uniform of the United States Military, will you please stand or wave.

Another thing I do is I get to give State of the State speeches. And as your governor, I’m proud to report, the state of Texas is strong and we’re about to make it even stronger.

We start at the pinnacle of America’s economy. Texas has been #1 in the nation for creating jobs for so many years it’s hard to keep count. But in 2014 we literally outdid ourselves. Texans created more jobs than in any year in the history of Texas.

And already this year, reports show that our economic engine continues to gain steam. Comptroller Hegar reported that sales tax revenue in January increased by 11%, surging to an all-time record.

The reason Texas leads the nation is because of our greatest natural resource – it’s you – the people of Texas. You’ve built a strong and diversified economy.

Texas leads the nation as a beacon of individual liberty and economic opportunity. Our job is to make sure we keep it that way.

The budget I submitted to my partners in the Legislature charts a course that will keep Texas #1.

Our journey begins with striving to create the best education system in America.

We’ve already seen that excellence can be achieved in Texas. In Dallas, African-American and Hispanic students pass AP exams at a higher rate than anywhere in America. In the Rio Grande Valley, I visited the IDEA Weslaco charter school where about 99% of the high school seniors go on to college. And the Irving Independent School District was just recognized as the 2015 Advanced Placement District of the Year. Irving is the best in the entire nation. We can be #1 in education if we apply the same tenacity and commitment to education as we do to job creation.

To improve our schools, we must build a strong foundation. Our goal should be to ensure all Texas students are performing at grade level in reading and math by the time they finish the 3rd grade.

To begin that process, my budget provides additional funding for schools that adopt high-quality Pre-K programs. My plan also provides Pre-K through 3rd grade teachers with world-class literacy and math teacher training. Our children and their future have no time for delay. That’s why I declared early education as my first emergency legislative item as governor.

We also want to see more of our high school graduates go on to college. To assist that goal we must make college more affordable and accessible.

Just like with primary and secondary education, higher education doesn’t work in a one-size-fits-all approach. Different students have different needs. And our employers are demanding that we better prepare our students for workforce needs.

For many, a two-year degree is far more than a piece of paper. It’s a key that opens the door to economic freedom. As just one recent example, Justin Friend attended Texas State Technical College in Waco and received a two-year degree in welding. In 2013 – his first full year as a welder – his income was about $130,000. Last year, this 24-year-old’s income rose to about $140,000. I’m thinking if this governor thing doesn’t work out, I’m going to TSTC to get a welder’s certificate.

The fact is not everybody needs a four-year college degree. We need to expand and support our community colleges that serves as the gateway to better jobs.

We also need to elevate the national research standing of our universities. My budget jumpstarts the process of elevating Texas higher education into the highest echelons by committing half a billion dollars to enhance research programs and attract nationally recognized researchers and Nobel Laureates to Texas universities.

The trail for this game-changing success is already being blazed. For example, the Chancellor’s Research Initiative at Texas A&M System has been recruiting the world’s foremost research scholars to College Station and Prairie View A&M, including 3 Nobel Laureates and 11 members of National Academies. I want to expand programs like this at all of our universities. Because of the vital role higher education plays in transforming our state, I declared higher education research initiatives my second emergency item.

Another fundamental responsibility of government is to build the road Texans need. With the passage of Prop 1 this past November, Texans sent a loud and clear message – you are tired of being stuck in traffic. It’s a sad day in Texas when a guy in a wheelchair can move faster than traffic on our congested roads.

My budget adds more than $4 billion a year to build more roads in Texas without raising taxes, fees, tolls or debt. This funding comes from 3 places, one is the funding received from Prop 1. Two, it ends diversions of state highway funds. Third, my plan constitutionally dedicates half of the existing motor vehicle sales tax to fund roads.

The plan is needed to ensure TxDOT has the sustainable, recurring and predictable revenue needed to plan large-scale, multi-year construction projects. Because this funding is so essential to the people of Texas, I declared transportation as my third emergency item.

When it comes to our state’s responsibilities, our first and foremost obligation is to protect our citizens’ safety. We cannot be naïve to the threat posed by drug cartels, trans-national gangs and human trafficking operations. In the face of such atrocities, we cannot respond with apathy, but with resolve.

On one of my many visits to the Rio Grande Valley, I met a young Latina who pleaded with me to keep my promise to secure the border. She told me about her younger brother being in a pick-up soccer game where kids were choosing up teams. But one of the boys was a child of a known cartel member. Should her brother pick the boy for his team? What would the consequences be if he did? If he didn’t? Our children should not be faced with such tough choices. We cannot fail that young Latina. We cannot fail our fellow Texans. We will do what the federal government has failed to do. We will secure our border.

My plan more than doubles current spending on border security. It adds 500 new state troopers, more Texas Rangers who can focus on corruption, more funding for local law enforcement and more technology to stop transnational criminal activity that threatens every community in Texas. It also expands our anti-gang efforts, helping us to disrupt dangerous gangs in places here in Houston, in Dallas, San Antonio and Austin. This legislation is essential, which is why I declared border security funding the fourth of my emergency items.

The most important commodity we have as elected officials is the bond we share with you – our constituents. Transparency and rising above even the appearance of impropriety will strengthen that bond. But rejection of ethics reform will rightfully raise suspicions about who we truly serve – ourselves – or you, the people of Texas.

I outlined multiple ethics reforms. Things like requiring elected officials to disclose contracts they have with public entities. Prohibiting lawmakers from voting on legislation from which they could profit. And adding more disclosure of campaign finance information. Because these ethics reforms are so important, I added this to my list of emergency items.

Finally, as governor, I will ensure Texas remains #1 for doing business. When you build your own business, government should be by your side, not riding your back. As governor, I will continue my legacy of pushing back against Washington when they spend too much or regulate too much. You don’t need a bunch of bureaucrats in Washington who’ve never run a business telling you how to run yours.

But it’s not just the federal government that needs to be reined in. Over-regulation at any level of government hinders your ability to grow your business. That’s why I’m committed to reducing regulatory costs at the state and local level and speeding up the permitting process.

I’m also insisting on lower taxes. Reducing taxes on employers is one of the best ways to stimulate job growth. I will reject any budget that doesn’t provide tax relief to Texas businesses. I will also insist on property tax reduction. It’s time for you – not government – to truly own your property.

Many of you have heard me say that our lives are not defined by how we are challenged. Instead, they are determined by how we respond to the challenges we face. That principle applies to those you elected to represent you in Austin. Our fellow Texans face many challenges – the need for better schools and more roads, border security, more jobs, they want less government and lower taxes and they deserve ethics reform. We can’t let their future be defined by these challenges. Instead, it is our responsibility to respond to these challenges.

May God bless you and your families. And may God forever bless the great state of Texas. 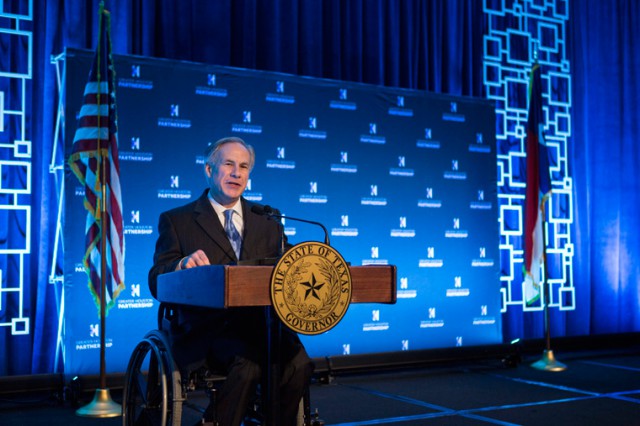