Since the launch of Operation Lone Star, the multi-agency effort has led to 304,700 migrant apprehensions and more than 19,800 criminal arrests, with more than 17,400 felony charges reported.

Texas has also bused over 8,000 migrants to our nation's capital since April and over 2,500 migrants to New York City since August 5. More than 600 migrants from Texas have arrived in Chicago since late August. The busing mission is providing much-needed relief to our overwhelmed border communities.

Governor Abbott yesterday announced the arrival of two buses of migrants from Texas outside Vice President Kamala Harris' residence at the United States Naval Observatory in Washington, D.C. This arrival of migrants comes days after Vice President Harris' trip to Houston, where she claimed the southern border was secure and denied the existence of a border crisis.

"The Biden-Harris Administration continues ignoring and denying the historic crisis at our southern border, which has endangered and overwhelmed Texas communities for almost two years," said Governor Abbott. "Our supposed Border Czar, Vice President Kamala Harris, has yet to even visit the border to see firsthand the impact of the open border policies she has helped implement, even going so far as to claim the border is ‘secure.’”

This week, Governor Abbott joined Fox News’ Jesse Watters Primetime to discuss Chicago Mayor Lori Lightfoot’s hypocritical response to receiving migrants from Texas in her sanctuary city. After receiving a few hundred migrants, the mayor began busing the new arrivals to the Chicago suburbs rather than welcoming them into her city.

‘[Mayor Lightfoot] is the epitome of being a hypocrite for doing exactly what she was criticizing me for but also not even acknowledging what President Biden has done,” said Governor Abbott. “President Biden has been flying migrants around the entire country, sometimes in the darkness of night. She's never said a word about what he has done.”

Texas National Guard soldiers describe the pride they take in being a part of Operation Lone Star and protecting Texas communities from drug and human trafficking and other transnational crimes.

“It’s definitely rewarding to be able to give back and support the community I’ve grown up in and continue to live my life,” said Airman First Class Medelez of the 432nd Air Expeditionary Group. “With this mission, we’re helping Border Patrol mostly because they’re overwhelmed with the amount of people coming in from the southern border.”

“We have to uphold the rules and laws of Texas and the United States,” said Senior Airman Kwame Asbill.

A human smuggler led DPS troopers on a high-speed vehicle pursuit in Willacy County. The smuggler eventually lost control of the vehicle, causing it to roll over and crash. The smuggler was charged with smuggling of persons, and 12 illegal immigrants were referred to Border Patrol.

A Texas National Guard soldier described the duties he performs as part of Operation Lone Star. Working alongside DPS and other local and federal law enforcement agencies, the soldier detailed patrols along the southern border while ensuring his fellow guardsmen have the resources needed to carry out their duties.

“[The mission] is important because we need to secure our border; we need to protect our way of life, our economy, and keep drugs out of our communities,” he said.

DPS special agents and Highway Patrol troopers discovered four illegal immigrants—three females and one child—hiding in a vehicle during a traffic stop in Hidalgo County. A personal amount of marijuana and a handgun were also recovered from inside the vehicle. The driver was charged with smuggling of persons and possession of marijuana.

“We are a quick reaction force that is intelligence-based, and we have the freedom to maneuver throughout all the zones,” said Sgt. First Class Stephen Mata. “We go to the area that is hot that week and pick and prod and try to find the illegal immigrants in that area.”

TRU operates with brush teams on land and boats patrolling the river, while partnering with other state and federal agencies to eliminate transnational criminal activity. 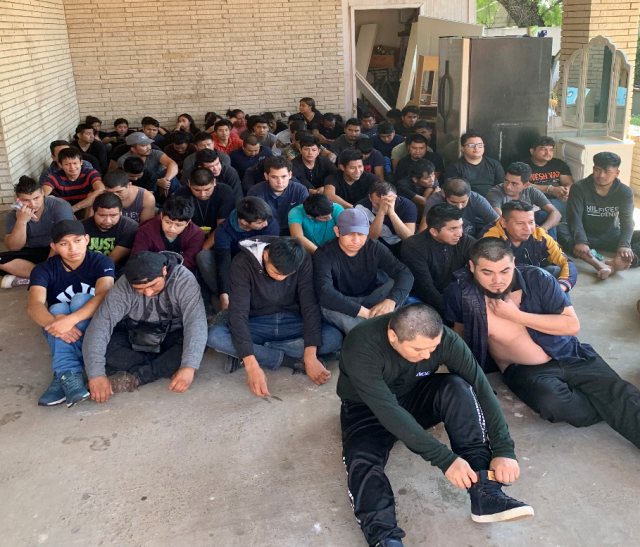