Since the launch of Operation Lone Star, the multi-agency effort has led to more than 296,000 migrant apprehensions and more than 18,700 criminal arrests, with more than 16,000 felony charges reported. In the fight against fentanyl, DPS has seized over 326 million lethal doses during this border mission.

Texas has also bused over 7,000 migrants to our nation's capital since April and over 900 migrants to New York City since August 5. The busing mission is providing much-needed relief to our overwhelmed border communities.

"Frankly, I don't know of a larger crisis facing our country right now," said Governor Abbott. "Before we began busing migrants to New York, it was just Texas and Arizona that bore the brunt of all the chaos and problems that come with it. Now, the rest of America can understand exactly what is going on."

“In the United States, there is a legal pathway that people can pursue to become a legal immigrant into the country," Governor Abbott said. "The problem is that President Biden is not enforcing what that standard is. When the rule of law is abandoned, it leads to the chaos that we’re seeing.”

Governor Abbott discussed the ongoing border crisis with El Paso’s KFOX and called New York City officials’ criticism of migrant buses arriving from Texas "hypocritical" because of the city’s self-identified sanctuary city status. The migrant busing mission is providing crucial relief to Texas’ local border communities, which are being overwhelmed with migrants dropped off by the federal government.

“It’s disingenuous because before I began busing migrants up to New York, President Biden was flying planeloads of these migrants into the city,” Governor Abbott said. “What Texas is doing is just a fraction of what President Biden was doing, but you never heard them complain before.”

DPS Lt. Chris Olivarez joined Fox News’ Neil Cavuto to explain how Governor Abbott has had to take unprecedented steps to stem the nonstop flow of illegal immigrants and deadly drugs into Texas as a result of President Biden’s reckless open border policies.

“Governor Abbott has been using every resource at his disposal because the federal government has failed to secure the border,” said Lt. Olivarez. “We’re seeing the numbers increase every single month, not only encounters, but drugs coming across, as well as suspected terrorists and gotaways.”

A Texas National Guard platoon leader described recent night operations in the Laredo area in which one group attempted to illegally cross into Texas but was interdicted in partnership with DPS. The group of illegal immigrants was apprehended in a residential area of the border city. Soldiers have noticed illegal border crossings in the area are typically attempted by groups of young men, ages 18 to 25 years old.

“We tracked them in on foot and had drones looking at them,” the solder said of the recent encounter. “I think we’re down here really making a difference.”

As part of Operation Lone Star, the Texas National Guard and DPS work together for a greater impact on curtailing criminal activity in Texas' border region.

“In past years, we’ve worked the border, but we’ve never had the Texas National Guard involved as we do today, which has been a great asset to our department and the State of Texas,” said DPS Sgt. Juan Maldonado. “We’re doing a good job of keeping them from coming into the city, where it could affect not only the citizens but also the schools of the communities.”

Texas National Guard soldiers apprehended five illegal immigrants crossing the Rio Grande River during a recent patrol of the area at dawn. The Tactical Response Unit (TRU) rounded a bend on the river and spotted a typical sign of illegal traffic, a ripple echo through otherwise calm waters.

“We came upon a raft that dropped off suspected illegal immigrants at a known point we call 'chicken landing,'” said Sgt. Noel Castillo, a member of the TRU team. “We caught up to the five individuals, who did not run up the bank, and prepared to transfer over the detainees into Border Patrol custody.”

Three additional illegal immigrants still in the raft turned around and returned to the Mexico side of the river, which is the best outcome for the TRU team when they encounter would-be illegal immigrants, according to Castillo.

DPS troopers were led on a vehicle pursuit by a smuggler on U.S. 281 in Hidalgo County. Several illegal immigrants bailed out of the vehicle before the smuggler stopped and was apprehended. The smuggler was charged with evading arrest and smuggling of persons. 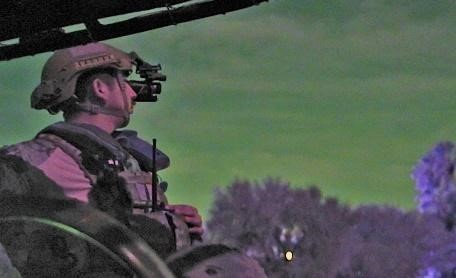