Since the launch of Operation Lone Star, the multi-agency effort has led to 311,000 migrant apprehensions and more than 20,500 criminal arrests, with more than 18,000 felony charges reported. In the fight against fentanyl, DPS has seized over 337 million lethal doses of fentanyl during this border mission.

DPS Lt. Chris Olivarez told Fox News this week that his agency is observing a significant increase in weapons smuggling. He said DPS has seized thousands of weapons associated with border-related criminal activity statewide, with AR-15s, AK-47s, and 50 caliber rifles among the seized weapons. He also notes that DPS is noticing more smugglers with firearms in the human smuggling attempts involving high-speed chases with DPS troopers.

“We're seeing weapons, human smuggling, and drug smuggling, as well as currency and illicit funds that are being smuggled back into Mexico to supply the cartels,” said Lt. Olivarez. “Cartels have been able to expand their criminal networks throughout the southern border because there is essentially an open border policy, and they’re taking full advantage of that. Policies need to be in place to slow down the flow of mass migration so that law enforcement can focus on the criminal elements.”

DPS Seizes 126 Lbs. Of Cocaine Worth Over $1.2 Million During Traffic Stop

On Wednesday morning, DPS seized 126 lbs. of cocaine after a traffic stop in Hidalgo County. The DPS Criminal Investigations Division with assistance from Texas Highway Patrol stopped a pickup truck towing a travel trailer in McAllen for a traffic violation. During the vehicle inspection, a trooper discovered 55 tape-wrapped bundles containing cocaine concealed in a hidden compartment inside the trailer.

The driver from Michigan was arrested and charged with felony manufacture and delivery of a controlled substance. The seized drugs have a street value of more than $1.2 million.

“The situation of illegal immigrants who are being smuggled on planes by these criminal organizations is a serious threat to national security,” said Lt. Olivarez. “For example, one of those immigrants was in possession of a fraudulent Texas ID card. We apprehended him, and he was a deported felon with an active warrant out of Wisconsin for sexual assault of a child."

A Texas National Guard soldier described how the Tactical Response Unit is able to use real data compiled for the week to set up operations in areas where non-family units are coming across the border in order to focus on the criminal side of illegal border crossings. He explained how one recent group they encountered included members of Mexican gangs.

“We’re able to track gang members coming over from the other side [of the border] and apprehend them to take them to the proper areas,” said Sgt. 1st Class Stephen Mata.

DPS troopers in Maverick County attempted to initiate a traffic stop on a gravel hauler for a traffic violation. After a vehicle pursuit, the driver bailed out and ran toward the brush.

A total of 17 illegal immigrants were apprehended and referred to Border Patrol.

A Texas National Guard soldier detailed how his platoon apprehends more than 30 to 40 illegal immigrants crossing the border each week, the majority of which are gang members, scouts and lookouts for the gangs, or coyotes charging money to guide illegal immigrants across the border. He notes, however, that soldiers’ proactive approach to patrolling the area near Hidalgo has improved with the help of sensors and cameras, which make locating illegal immigrants more strategic.

“We know a lot of them are gang members because if they get away and get into the river, they throw gang signs and antagonize us,” said Staff Sgt. Riener Mongerson, Echo Company, 3rd Battalion, 141st Infantry platoon leader. “We don’t get a lot of people surrendering in our area, mostly people who run.”

An 18-year-old human smuggler led DPS troopers on a high-speed pursuit in Uvalde County. After disabling the vehicle, the smuggler bailed out and was later apprehended.

A total of 13 illegal immigrants from Mexico were apprehended and referred to Border Patrol. 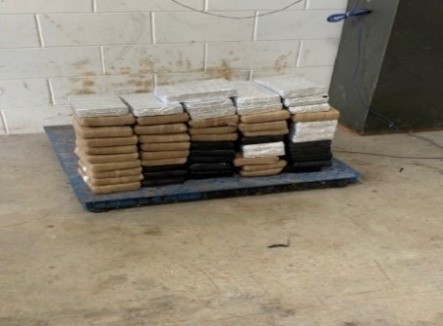