Governor Greg Abbott, the Texas Department of Public Safety (DPS), and the Texas National Guard are continuing to work together to secure the border, stop the smuggling of drugs, weapons, and people into Texas, and prevent, detect, and interdict transnational criminal behavior between ports of entry in response to the federal government's unwillingness to address the border crisis.

Since the launch of Operation Lone Star, multi-agency efforts have led to more than 225,000 migrant apprehensions, along with more than 13,300 criminal arrests — and more than 10,700 felony charges. Over 3,600 weapons and almost $30 million in currency have been seized. In the fight against fentanyl, DPS has seized over 297 million lethal doses throughout the state.

Governor Abbott announced on Wednesday aggressive actions by the State of Texas to secure the border in the wake of President Biden's decision to end Title 42 expulsions. Governor Abbott has directed TDEM to charter buses and flights to transport migrants to Washington, D.C. Governor Abbott has also directed DPS to conduct enhanced safety inspections of vehicles, effective immediately, as they cross international ports of entry into Texas.

Governor Abbott also announced additional strategies being deployed immediately to secure the border. DPS and the Texas Military Department (TMD) are preparing additional boat blockades, deploying razor-wire at low-water crossings and high-traffic areas, and installing container blockades to stem the flow of illegal crossings. Additionally, all DPS troopers and specially trained Texas National Guard soldiers will be given riot gear in case of violence among caravans and migrants.

Governor Abbott spoke with Fox News on Thursday morning, where he provided more details on the state's plan to bus unlawful migrants from Texas to Washington, D.C.

Last week, a DPS Trooper stopped a truck and discovered 76 illegal immigrants concealed inside a gravel trailer. The driver is from Honduras with a lengthy criminal history for drug and weapons possession. At the time of the incident, he was in possession of methamphetamine and charged with human smuggling.

On Thursday, DPS and the Texas National Guard helped apprehend two groups of illegal immigrants in the Mission, Texas area.

This week, the Texas National Guard began the first phase of mass-migration rehearsals ahead of President Biden's decision to end Title 42 expulsions. The rehearsals include "show of force" exercises, pictured below in the Rio Grande Valley.

This week, Governor Abbott ordered the Texas National Guard to be prepared to emplace an on-the-water blockade within the Rio Grande River to deter and prevent criminal activity along the Texas-Mexico border. The Texas Guard began rehearsals of mission concepts to be prepared to respond to expected mass migration incursions into the state of Texas following President Biden's announcement that he would end Title 42 expulsions. 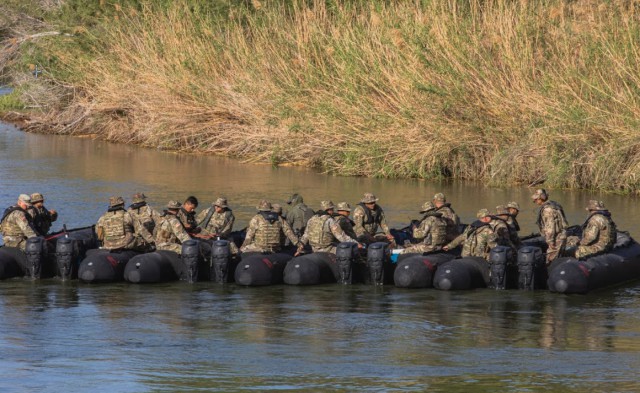