Since the launch of Operation Lone Star (OLS), multi-agency efforts have led to more than 242,000 migrant apprehensions, along with more than 14,000 criminal arrests — and more than 12,000 felony charges. Over 4,700 weapons and over $38 million in currency have been seized. In the fight against fentanyl, DPS has seized over 344 million lethal doses throughout the state.

Governor Abbott joined The Chris Salcedo Show on Newsmax, where he discussed the state's ongoing efforts to secure the border and provided an update on the historic agreements with all four Mexican border governors.

DPS Lt. Chris Olivarez joined Fox News Digital where he discussed how human smugglers are targeting teenagers on social media platforms, like TikTok and Instagram, by offering them money to pick up migrants from Mexico. Teens will then take the migrants to bigger cities like San Antonio, Austin, or Houston.

During a commercial vehicle safety inspection in Jim Wells County, a DPS trooper located several boxes containing $496,472 of U.S. currency concealed inside the cab area of a semi-truck. The driver was arrested for money laundering.

Texas Army National Guard troops rehearsed response efforts to mass migrations on May 2 at the Laredo Columbia Solidarity International Bridge. In the event of mass migrations occurring within many miles of the bridge, troops are available to rapidly deploy in response. Like many locations nearby, the bridge has been known to receive groups of over a hundred migrants attempting to illegally cross the border at one time.

Texas Air National Guardsmen collaborated with the United States Coast Guard and Border Patrol to apprehend illegal immigrants and seize smuggled drugs on April 29 near the Brownsville Ship Canal. The Airmen tracked the smugglers on the ground using thermal technology, while Coastguardsmen followed the traffickers by boat. The joint effort led to the apprehension of three illegal immigrants and 168.2 pounds of marijuana. 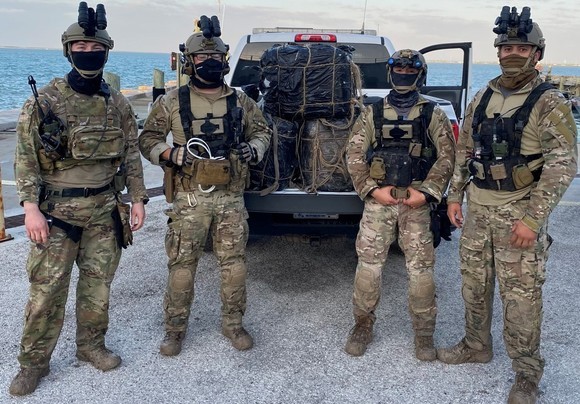