Since the launch of Operation Lone Star, the multi-agency effort has led to more than 284,000 migrant apprehensions and more than 17,400 criminal arrests, with more than 14,800 felony charges reported.

Governor Abbott joined KETK/KFXK in Tyler to discuss the continued crisis unfolding along the southern border caused by the federal government's refusal to secure the border. The Governor also highlighted how his initiative of busing migrants to Washington, D.C. is helping Texas border communities overwhelmed by record-high numbers of illegal crossings while bringing the border crisis to President Biden's doorstep.

“This is a crisis caused by President Biden,” said Governor Abbott. “Just two years ago, we had the most secure border in decades, and now under President Biden we have the highest number of border crossings in history."

In an interview with KLBK in Lubbock, Governor Abbott discussed the surging number of illegal border crossings from Mexico into Texas. With local border communities overrun as the federal government dumps migrants into their towns, the Governor’s busing mission is proving to officials in Washington, D.C. how difficult the task is.

“Now, Washington, D.C. is having to realize, in a very minimal way, exactly what Texas is having to deal with as a result of the open border policies that the Biden Administration has allowed,” said Governor Abbott.

DPS Lt. Chris Olivarez explained to Fox Business how Governor Abbott’s mission to bus migrants to Washington, D.C. provides relief from the influx of illegal immigrants overwhelming local border communities. He also said the crisis at the border is only continuing to escalate, particularly with unaccompanied migrant children, as the federal government refuses to respond.

“Washington, D.C. is experiencing only a fraction of what these smaller border communities face every single day, when you have anywhere from 2,000 to 3,000 migrants crossing the border daily in those areas,” said Lt. Olivarez, in response to criticism from D.C. officials receiving buses of migrants. “It just goes to show you that they’re were not feeling the impact that these local communities experience.

Tactical Air Control Party Texas (TACP) members with the Texas National Guard have eradicated drug smuggling in a 30,000 acre area that was formerly a hotbed for trafficking operations prior to the soldiers’ deployment. Roughly a dozen TACP airmen are responsible for capturing more than 350 illegal immigrants, 34 human smugglers, and more than 800 lbs. of marijuana during a three-month span. The past two months have seen a reduction in apprehensions and drug seizures, as cartels have become wary of the TACPs.

The soldiers had to work through limited cell reception in the area that impeded their ability to communicate among themselves and relay tactical information to mission partners, Border Patrol, and DPS. Using cutting-edge technology from the Texas Military Department, airmen were able to create their own communication network incorporating satellites. This allowed soldiers and law enforcement partners to coordinate and respond to illegal activity along the border within minutes.

“What these airmen have been able to accomplish in five months is remarkable,” said U.S. Air Force Capt. Andres Cepeda. “At the end of the day, this is our community, and we are effecting change, taking drugs off the street and stopping human trafficking. It feels awesome.”

DPS Lt. Chris Olivarez describes to Fox News the deadly fentanyl scourge killing nearly 300 Americans each day. As the leading cause of deaths for Americans ages 18 to 45, 95% of fentanyl in the United States is coming across the southern border and is manufactured and distributed by Mexican cartels.

“What is concerning to me, not just as a law enforcement officer but as a parent, and what should concern the American people is why isn’t the federal government acting and taking an aggressive stance to go after the Chinese and Mexican governments to crack down on labs producing these deadly drugs,” Lt. Olivarez said.

Fox News’ Bill Melugin shared photos taken while embedded with DPS in the Big Bend sector showing bundles of drugs stashed by smugglers. The bundles were found buried and hidden under rocks in the remote region. Elite tracker Sgt. Jimmy Morris spotted the bundles from the air.

The Texas National Guard perform night patrols on the Rio Grande to continue the Operation Lone Star mission of deterring illegal transnational activity. While traveling up and down the river, soldiers using night vision capabilities scan both the U.S. and Mexico sides. If illegal immigrants are encountered on the river, either Border Patrol will interdict the group or soldiers will coordinate the apprehension with Border Patrol.

Texas National Guard soldiers practiced Mass Migration Response tactics last week and continue to perform preparatory exercises to respond to any upcoming mass events. The exercises displayed the capabilities of the civil defense office in the Del Rio region to respond to a large, hostile group of illegal immigrants 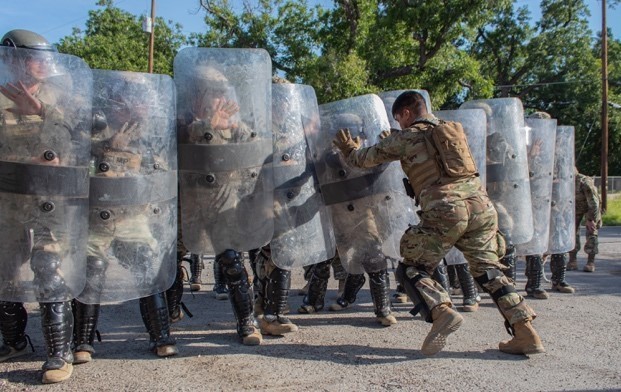