Governor Greg Abbott, the Texas Department of Public Safety (DPS), and the Texas National Guard continue to work together to secure the border, stop the smuggling of drugs, weapons, and people into Texas, and prevent, detect, and interdict transnational criminal behavior between ports of entry in response to the federal government's unwillingness to address the border crisis.

Since the launch of Operation Lone Star, multi-agency efforts have led to more than 239,849 migrant apprehensions, along with more than 14,364 criminal arrests — and more than 11,666 felony charges. Over 4,710 weapons and almost $37 million in currency have been seized. In the fight against fentanyl, DPS has seized over 342 million lethal doses throughout the state.

Governor Abbott spoke with Fox News' Bret Baier on Monday evening, where he discussed the state's ongoing efforts to secure the border and provided an update on the historic agreements with all four Mexican border governors.

OP-ED: Governor Abbott: "Time for Biden to do his job: Secure our border"

Governor Abbott wrote an exclusive op-ed for Fox News highlighting President Biden's failure to secure the border and how Texas is stepping up in the federal government's absence through Operation Lone Star to stop the flow of deadly drugs, rising crime, and illegal immigrants into the United States.

A United States citizen was arrested for human smuggling and 31 illegal immigrants were apprehended by DPS in a collaborative effort with the Texas Game Wardens and Reeves County Sheriff's Office after DPS received a 9-1-1 call regarding human smuggling involving a trailer off of Interstate 20.

Texas Air National Guardsmen helped stop a human smuggling operation on April 19 near Brownsville. The thwarted operation led to the arrest of a human smuggler and the apprehension of seven illegal migrants. The guardsmen spotted the smuggler crossing the border in a silver car. The driver of the car lost control, crashed into a Port of Brownsville gate, and the migrants ran into the brush. Texas National Guardsmen, DPS Troopers, and Border Patrol agents located eight individuals.

Texas Military Department Delta Company, from Task Force East, arrived near the Anzalduas Bridge for a Mass Migration Response Exercise on April 23. The purpose was to train for a rapid response in the event of a mass migration movement across the Rio Grande River near McAllen.

DPS Assistant Chief Stacy Holland joined Newsmax for an interview discussing the increase of drug smuggling across the border into Texas as a result of the federal government's inaction to secure the border. 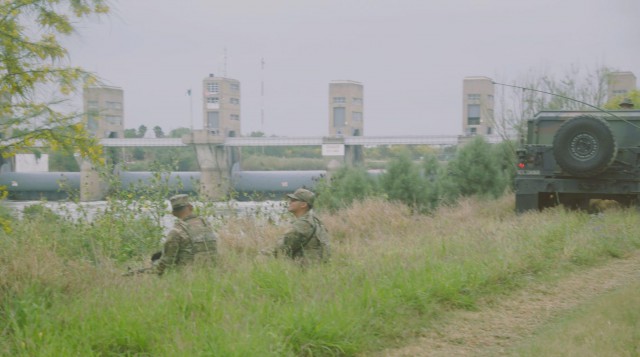