Since the launch of Operation Lone Star, multi-agency efforts have led to more than 215,000 migrant apprehensions, along with more than 12,400 charges for criminal offenses— including more than 9,900 felony charges. Over 3,300 weapons and almost $30 million in currency have been seized. In the fight against fentanyl, DPS has seized over 288 million lethal doses throughout the state.

Last week, Governor Abbott spoke exclusively with Breitbart News in Eagle Pass on the steps Texas is taking to secure the border and build the wall. The Governor discussed the state's acquisition of border wall panels from the federal government, the terrifying impact of the border crisis on Texas landowners along the border, the fentanyl crisis, and more.

“We've apprehended enough fentanyl to kill every man, woman, and child in Texas, and fentanyl is the leading cause of death in the United States for people between the age of 18 and 45⁠—not COVID-19, not cancer, not car wrecks, not guns⁠—it’s fentanyl," said Governor Abbott. "In Texas, more than 1,300 people lost their lives over the past year because of fentanyl. There are lives that have been lost because of the Biden Administration’s refusal to secure the border, and conversely there are lives that have been saved by the all of the fentanyl and other drugs we’ve seized through Operation Lone Star."

A man is facing charges after leading DPS troopers and other law enforcement on a vehicle pursuit through two South Texas counties.

On the evening of March 11, 2022, a white Kenworth truck tractor towing a tanker bypassed a U.S. Border Patrol checkpoint on U.S. 83 in Webb County. Border Patrol initiated a pursuit, but the driver of the tanker refused to stop. As part of Operation Lone Star, DPS Troopers took over the pursuit, which went into the city of Cotulla in La Salle County.

Inside the tanker, Troopers located 62 migrants who were being smuggled into the U.S.; none were injured. All were referred back to U.S. Border Patrol. The 41-year-old male driver of the truck is a U.S. citizen with a criminal history that includes human smuggling. Charges are likely. A DPS Trooper was also injured in the incident. He has since been treated and released from Frio Regional Hospital in Pearsall.

Governor Abbott announced this week that the Texas National Guard are taking more aggressive action at the Rio Grande River to prevent unlawful migrants from entering the United States altogether and turning them back to Mexico. Different actions include installing razor wire along the river and using boats to create a boat blockade.

On Wednesday, March 9, an Operation Lone Star Elite Brush Team partnered with Border Patrol to capture 24 unlawful migrants in Jim Hogg County, 14 of which were were arrested for criminal trespass. Operation Lone Star's Elite Brush Teams consists of DPS troopers and Texas National Guard soldiers who serve as the last line defense against transnational criminal behavior. The brush teams use a variety of sensors, tracking systems, and other techniques to identify individuals and their country of origin as well as their intended destination.

Over the last 90 days, the brush teams have supported more than 1,000 apprehensions along the Texas-Mexico border. Approximately 30% of these individuals apprehended had a prior criminal record for activities such as sexual assault, drug smuggling, and human smuggling.

The men and women of the Texas National Guard continue to build barriers that serve as a visible and physical impediment to the smuggling of people and drugs into Texas. So far, 23 miles of concertina wire and chain link fencing have been installed along the border. Texas National Guard soldiers also play a critical role in Operation Lone Star to prevent, detect, and interdict transnational criminal behavior between the ports of entry. 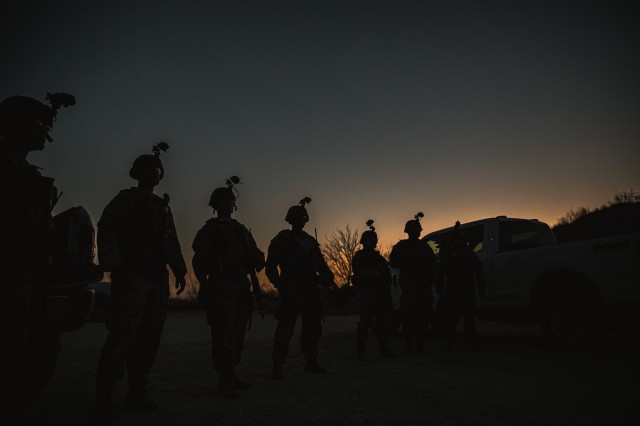