Governor Greg Abbott today met with Her Excellency, Tsai Ing-wen, President of the Republic of China (Taiwan) in Houston to discuss energy, trade relations and commercial ties between Taiwan and the State of Texas. Governor Abbott and President Tsai discussed ways to increase trade relations with Taiwan, particularly in the exchange of natural gas and agricultural products, of which Taiwan is a major consumer. Additionally, the two leaders discussed the strong biotechnology sectors in both Texas and Taiwan and the potential for future cooperation in medical facility development. Governor Abbott and President Tsai concluded the meeting by exchanging gifts, with President Tsai receiving a clock bearing the Texas State Seal and Governor Abbott receiving a Taiwanese vase.

“It was an honor to meet with President Tsai and discuss how our two economies can expand upon our already prosperous trade partnership,” said Governor Abbott. "Thanks to our favorable regulatory and legal climate, Texas remains and will continue to be a premier destination for Taiwanese businesses to expand and thrive. I look forward to strengthening Texas’ bond with Taiwan and continuing my dialogue with President Tsai to create even more opportunity and a better future for our citizens.”

"Texas and Taiwan share longstanding relationship based on trade, investment, and tourism," said President Tsai. "In 2015, Taiwan was Texas’ 5th largest export market in Asia. Texas has attracted more than US$ 10 billion in investment from Taiwan companies, such as Formosa Plastics, Foxconn, Inventec, and Eva Air. The edge which Texas holds in energy, biotechnology, smart machinery, and defense industries overlaps with the 5 major innovative industries which my administration has been promoting in Taiwan. Therefore, I believe there will be more opportunities for both sides to work even closer in the future." 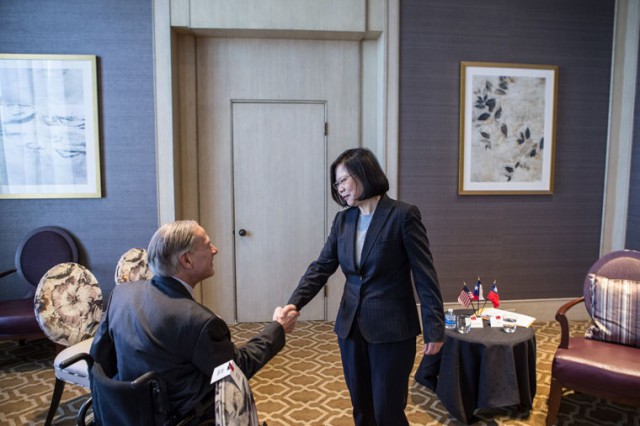