Governor Greg Abbott today visited Salado where he met with local officials from communities impacted by severe storms and a tornado that occurred Tuesday night in Bell and Williamson Counties. Governor Abbott reaffirmed the State of Texas' commitment to ensuring Texans affected by these storms and tornado will have the resources and support they need to recover and rebuild their communities. The Governor also thanked local officials in Bell and Williamson Counties, first responders, and volunteer emergency personnel for their swift response to help their fellow Texans.

"There is no force of nature more powerful than Texans helping Texans, and together we will rebuild communities affected and help them come back stronger than before," said Governor Abbott. "Thank you to all first responders and volunteer emergency personnel for stepping up swiftly to assist their fellow Texans in the wake of this tornado. I ask Texans to join Cecilia and me in praying for the victims, including local officials and emergency response personnel, as they navigate response and recovery efforts in their communities. As we enter a time of celebration for Easter Sunday, may we also celebrate the strength and resilience of the Lone Star State."

During his remarks, the Governor noted that 70 homes and 3 church buildings were damaged, but no lives had been lost as a result of the storm. Governor Abbott also noted that, in true Texas fashion, volunteers in the area were the first to offer swift response to communities and commended them for being on scene within thirty minutes to aide Texans. He also thanked electric providers in the area for their quick response to restore power in the area.

Texans can contact 254-534-2217 to volunteer or donate to the Bell and Williamson County storm victims. Homeowners impacted by the storm and tornado can call 254-534-4562 to receive assistance.

Texans impacted by the storm in Bell and Williamson Counties are encouraged to complete the Texas Division of Emergency Management’s (TDEM) Self Reporting Damage Survey. This survey will help the state identify damages across Texas and help emergency management officials gain an understanding of damages that occurred during the recent severe weather. This data is also needed to provide information to FEMA to determine the state's eligibility and highlight the need for federal disaster assistance for individuals. The voluntary survey, available in both English and Spanish, can be accessed by visiting: damage.tdem.texas.gov. Reporting damage to TDEM is a voluntary activity, is not a substitute for reporting damage to an insurance agency, and does not guarantee disaster relief assistance.

Earlier this week, Governor Abbott issued disaster declarations for Bell and Williamson Counties to help jumpstart rebuilding efforts as a result of the severe weather and tornado. 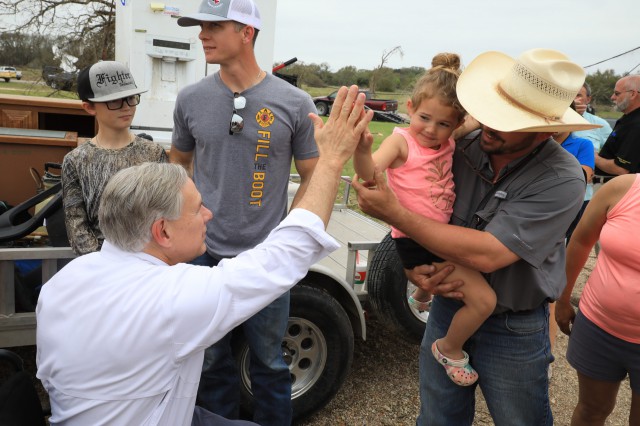