"Now, more than ever, it is imperative that our law enforcement officers and Texas National Guard soldiers adopt innovative solutions needed to counteract President Biden’s reckless decision to end Title 42 expulsions next week," said Governor Abbott. "While the federal government abandons its constitutional duty to defend America and secure the border, the State of Texas continues taking unprecedented action to deescalate and decrease the influx of dangerous criminals, illegal weapons, and deadly drugs like fentanyl into our country. Stepping up to overcome extraordinary challenges is embedded in the spirit of Texas, and I have no doubt that the exceptional men and women serving Texans—and Americans—through Operation Lone Star will employ the best possible strategies to navigate the uncharted waters of President Biden’s escalating border crisis."

The Governor was joined for the briefing by Texas Military Department (TMD) Adjutant General Thomas Suelzer, Texas Department of Public Safety (DPS) Director Steve McCraw, TMD Major General Win Burkett, and other Operation Lone Star leadership and local officials. During the briefing, the Governor and law enforcement officials discussed how the State of Texas will continue enhancing border security efforts and strategies to address the drastic spike of an estimated 18,000 illegal crossings per day expected next week following the end of Title 42.

The Governor also visited Texas National Guard soldiers and DPS troopers stationed along the border for Operation Lone Star and thanked them for their service to the people Texas to secure the border and keep our communities safe.

Governor Abbott has taken unprecedented action to secure the border in the wake of the federal government’s inaction, including: 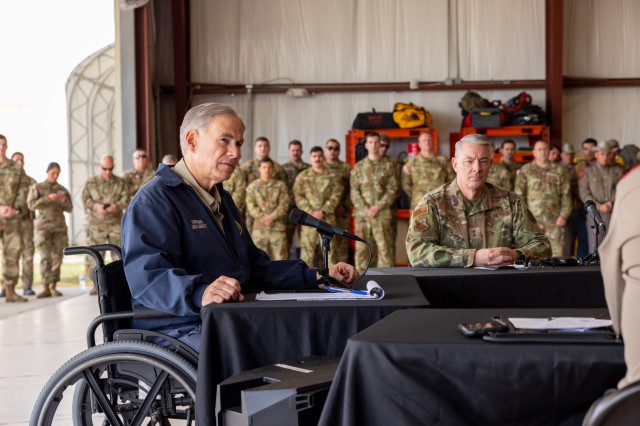