Governor Greg Abbott today held a press conference in Del Rio where he vowed to continue surging state resources to secure the border and address the chaos in Del Rio created by the Biden Administration. During his remarks, Governor Abbott thanked the Texas Department of Public Safety, the Texas Military Department, and local personnel for their robust response to the Biden Administration's failure to enforce immigration laws, including the surge of more than 16,000 migrants arriving at the Del Rio International Bridge over the past week. The Governor also added that the State of Texas will continue to strategically deploy resources to other areas along the border as part of the ongoing efforts of Operation Lone Star.

During his remarks, the Governor also thanked members of the Texas Legislature for passing House Bill 9, legislation providing an additional $2 billion in border security funding.

"The State of Texas is taking unprecedented steps to secure the border, and we will continue to respond in full force to keep Texans safe," said Governor Abbott. "The Biden Administration's failure to enforce immigration laws and halt illegal crossings on a federal dam poses life-threatening risks to Texans and the migrants themselves. Texans ― and all Americans ― demand and deserve a secure southern border and the protection of our nation's sovereignty. I thank the brave men and women of the Texas Department of Public Safety and the Texas National Guard for stepping up in the federal government's absence to address this crisis."

Governor Greg Abbott yesterday announced the availability of $100 million in grant funding through the Operation Lone Star Grant Program to enhance interagency border security operations supporting OLS. On Monday, the Governor sent a letter to President Joe Biden requesting an emergency declaration for the State of Texas as a result of the escalating crisis at the border, specifically due to the dire situation in Del Rio.

The Governor launched Operation Lone Star in early March to help secure the border and combat the smuggling of people and drugs in Texas. There are currently thousands of state personnel, including DPS troopers, agents, and rangers, and National Guard Soldiers who are engaged in the mission and working with local law enforcement. The Governor expanded the mission shortly after its launch to include anti-human trafficking efforts. Governor Abbott's plan to secure the border also includes the construction of a border wall, in addition to the use of strategic fencing and other barriers. A project manager for the initial stage of building the wall was announced September 16. 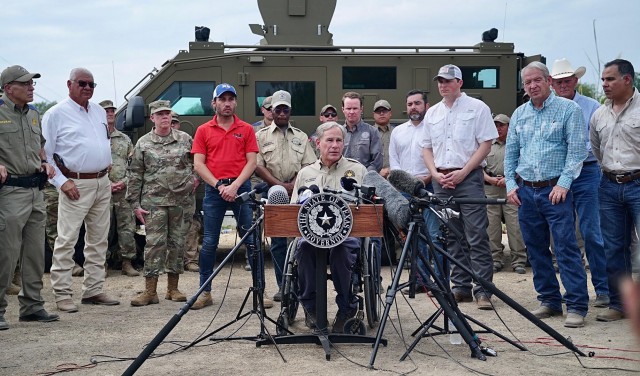