Governor Greg Abbott today visited Grace Community Church in The Woodlands, Texas where he was joined by Lt. Governor Dan Patrick, Pastor Steve Riggle and faith leaders across the Lone Star State for a ceremonial signing of Senate Bill 24 (SB 24). SB 24, more commonly known as the “Sermon Safeguard Bill,” will prevent Texas state and local governments from issuing a subpoena for religious sermons, and protects religious leaders from being compelled to testify regarding their sermons.

“Freedom of religion is the most sacred of our rights – it is what makes us America and is what gave our nation its start,” said Governor Abbott.

Efforts to erode religious liberty are a threat to all liberty, and our religious leaders must be absolutely secure in the knowledge that religious freedom is beyond the reach of government. I am proud to sign this bill to shield our pastors’ sermons from subpoena and their right to speak freely about their faith. As governor, I will always fight to preserve our religious liberty as Americans, and as Texans.

In 2014, the city of Houston issued subpoenas to five local pastors, including Pastor Steve Riggle, seeking speeches, presentations or sermons related to the proposed Houston Equal Rights Ordinance. In response to those subpoenas, then-Attorney General Abbott sent a letter to Houston’s city attorney urging him to “immediately instruct your lawyers to withdraw the City’s subpoenas” stating the city’s action was “a direct assault on the religious liberty guaranteed by the First Amendment.”

This law will go into effect immediately. 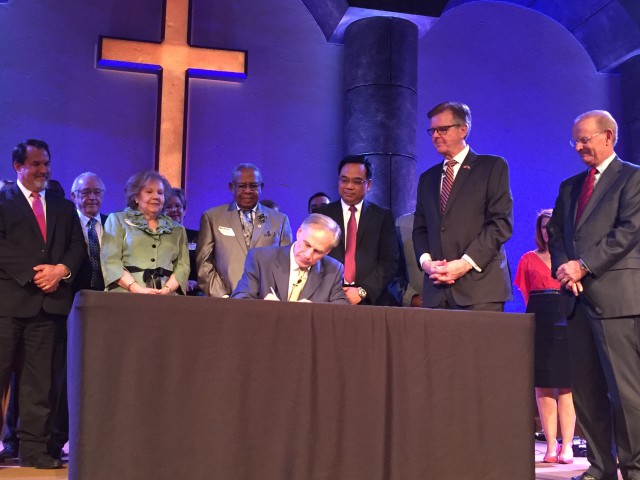