Following their meeting, Governor Abbott and Governor García signed a memorandum of understanding between the State of Texas and the Free and Sovereign State of Nuevo León to enhance border security measures that will prevent illegal immigration from Mexico to Texas and improve the flow of traffic across the Colombia Solidarity International Bridge. The agreement goes into effect immediately.

"Texans demand and deserve an aggressive, comprehensive border security strategy that will protect our communities from the dangerous consequences related to illegal immigration," said Governor Abbott. "Until President Biden enforces the immigration laws passed by Congress, Texas will step up and use its own strategies to secure the border and negotiate with Mexico to seek solutions that will keep Texans safe. This historic memorandum of understanding between Texas and Nuevo León is a major step in the Lone Star State's efforts to secure the border in the federal government's absence.”

This memorandum comes after Governor Abbott directed DPS to conduct enhanced safety inspections of vehicles crossing international ports of entry into Texas ahead of an anticipated rise in cartel-facilitated smuggling upon the Biden Administration's decision to end Title 42 expulsions.

In addition to announcing the memorandum of understanding between Texas and Nuevo León, Governor Abbott noted that governors from Tamaulipas, Coahuila, Chihuahua, as well as the Chief Officer for the North American Unit at the Mexican Secretariat of Foreign Affairs, have been in contact with the Office of the Governor and the Texas Secretary of State about signing similar memorandums.

Read the Governor's Memorandum of Understanding in English.

Read the Governor's Memorandum of Understanding in Spanish. 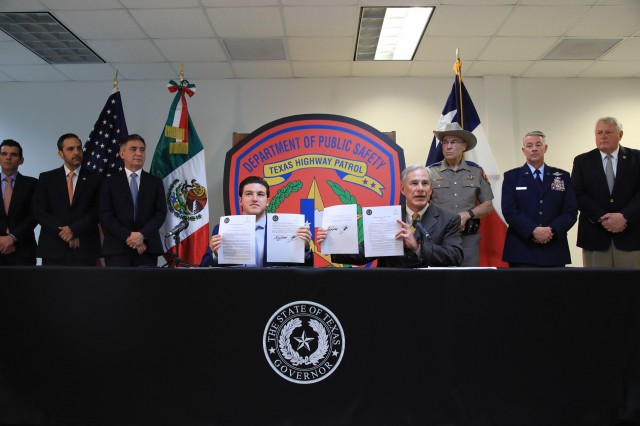