Governor Greg Abbott today hosted Minister for Development Cooperation Foreign Trade of Finland Ville Skinnari, Ambassador of Finland to the United States Mikko Hautala, and other Finnish government officials at the Governor's Mansion in Austin to discuss the State of Texas' ongoing economic partnership with the Republic of Finland.

During the visit, Governor Abbott and Minister Skinnari signed a Statement of Mutual Cooperation to strengthen the economic partnership between the State of Texas and the Republic of Finland. This agreement will help facilitate the expansion of business, encourage job creation, and promote innovation through collaboration and joint research in technology, cybersecurity, aerospace, aviation, health, energy, transportation, and other important industries.

"I was honored to host Minister Skinnari, Ambassador Hautala, and other Finnish government officials at the Governor's Mansion today to sign this Statement of Mutual Cooperation," said Governor Abbott. "Texas and Finland have a strong cultural and economic relationship, and this agreement will strengthen the bond we already share. From energy, to aerospace, to electric vehicles, this Statement of Mutual Cooperation will expand business, create jobs, and promote innovation in so many critical areas important to both Texas and Finland. Working together, we are charting a course towards a brighter future for the people of Texas and Finland."

Governor Abbott was also joined by Texas Secretary of State John B. Scott, Minister Counselor for Sustainable Growth and Commerce Christian Heikkinen, Special Advisor to the Minister for Development Policy Emmi Mäkelä, Desk Officer for Asia and the Americas Ikka Myllymäki, Press Counselor Pasi Rajala, and Executive Director of the Governor’s Economic Development and Tourism Office Adriana Cruz. During the meeting, the Governor and the Finnish delegation exchanged gifts, including a Texas bluebonnet bowl and an Iittala Kartio glass pitcher.

Read the Statement of Mutual Cooperation. 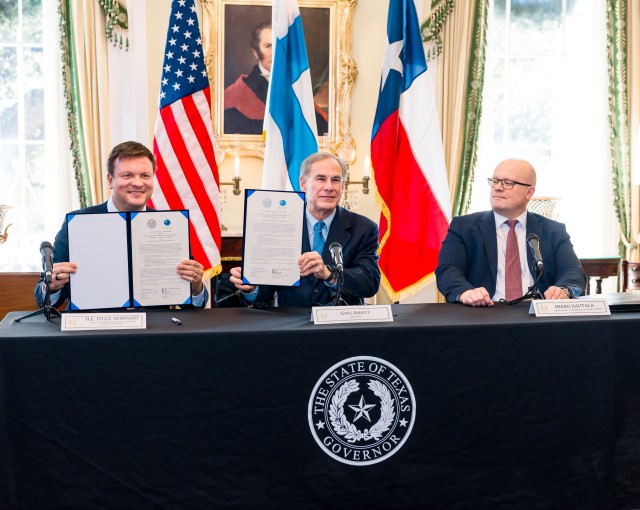