Governor Greg Abbott today provided an update on the State of Texas' ongoing coordinated wildfire response efforts at a press conference following a briefing with state and local officials in Glen Rose. Earlier this week, the Governor directed the Texas Division of Emergency Management (TDEM) to continue coordinating the state's ongoing response to these fires, including the Chalk Mountain Fire.

"Wildfires continue to impact communities across our state, and the State of Texas is working around the clock to ensure Texans and their loved ones are kept safe," said Governor Abbott. "Thank you to the brave first responders and emergency response personnel for their courage in protecting their local communities. As we continue our efforts to safeguard our communities, Texans should remain vigilant, weather-aware, and mindful of guidance from their local officials as we navigate potential and ongoing fires."

During the press conference, the Governor signed a disaster declaration in response to fire activity throughout Texas, amending the original declaration to include Somervell County among 10 new counties. Governor Abbott also thanked first responders, state agencies, and local partners for a rapid and coordinated containment response.

Last week, Governor Abbott renewed a wildfire disaster declaration that includes 73 counties affected by wildfire threats. The Governor also renewed a drought disaster declaration for 189 counties affected by exceptional drought conditions. According to the latest update from the U.S. Drought Monitor, more than 99 percent of the state is experiencing some level of drought conditions. According to the Texas A&M Forest Service, rainfall that some communities received last week only offered a temporary reprieve from the dry conditions.

The Governor also encouraged Texans affected by wildfires to complete TDEM's Self Reporting Damage Survey. This survey will help the state identify damages across Texas and allow emergency management officials to gain an understanding of damages caused by recent wildfires. This data is also needed to provide information to the Federal Emergency Management Agency to determine the state's eligibility for federal disaster assistance and highlight the need for individuals. The voluntary survey, available in both English and Spanish, can be accessed by visiting: damage.tdem.texas.gov. Reporting damage to TDEM is a voluntary activity, is not a substitute for reporting damage to an insurance agency, and does not guarantee disaster relief assistance. Users should select "Wildfire Outbreak" as the active incident. 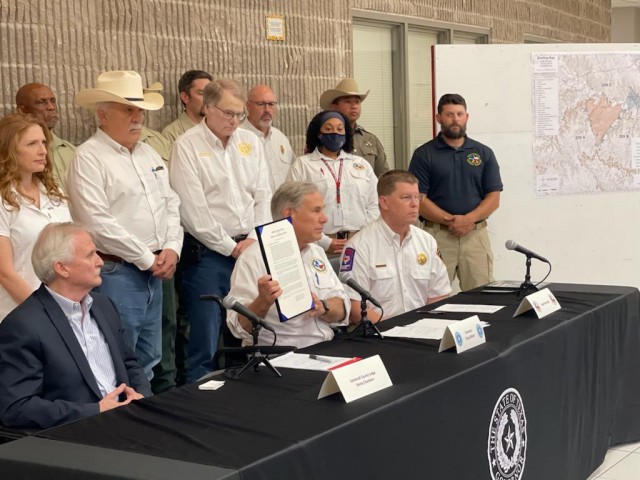