Governor Greg Abbott today met with McAllen Mayor Javier Villalobos and other city officials to discuss McAllen and the entire Rio Grande Valley's ever-growing economic and cultural impact in the state of Texas. The Governor and city officials also talked about the state's collaborative efforts with McAllen officials to secure the border and keep Texans safe. During the discussion, the Governor presented a proclamation and a Texas flag to Mayor Villalobos to congratulate him on being sworn in as mayor of McAllen earlier this year.

Following the meeting with city officials, the Governor signed Senate Bill 576 into law, which will crack down on human smuggling in Texas. The Governor was joined for the meeting and bill signing by Representative JM Lozano and members of the McAllen City Commission, as well as law enforcement, judicial, and other local officials from the Rio Grande Valley.

"As we continue to combat the crisis at our border, the State of Texas is using every tool we have to secure the border and protect innocent lives from crimes related to illegal immigration like human smuggling," said Governor Abbott. "That is why I am proud to sign Senate Bill 576 into law, which will help us crack down on human smuggling and keep our communities safe. Thank you to Senator Juan "Chuy" Hinojosa and Representative JM Lozano for working together on this legislation and for your efforts to protect vulnerable people from the horrors of human smuggling."

Senate Bill 576 enhances the criminal penalty for human smuggling when a payment is involved. SB 576 also eliminates the requirement of proof for prosecution that a smuggler intended to receive payment for the crime of human smuggling. 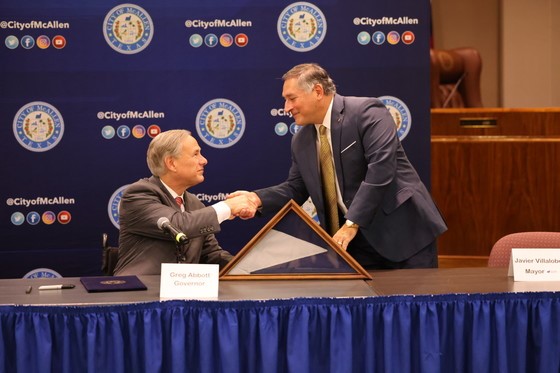