Governor Greg Abbott today delivered remarks at the announcement of DHR Health's Level 1 Trauma Center designation and ceremonially signed Senate Bill 827 into law in Edinburg. This new designation will improve access to healthcare in the Rio Grande Valley by ensuring access to the highest level of comprehensive trauma care for Texans in the community. Prior to DHR Health's designation, the closest Level 1 Trauma facility was 240 miles away in San Antonio.

The Governor thanked DHR Health's hospital leaders, doctors, and staff for their life-saving work and Senator Chuy Hinojosa for helping secure funding for the designation. He also thanked Senator Lois Kolkhorst, Representative Eddie Lucio III, and members of the Texas Legislature for their work on Senate Bill 827.

Senate Bill 827, which limits the co-pays to $25 for each insulin prescription per month for insured Texans on state-regulated health plans, was passed during the regular session of the 87th Legislature and became law on September 1, 2021.

"DHR Health's Level 1 Trauma Center designation is a monumental step in securing better healthcare for Texans in the Rio Grande Valley," said Governor Abbott. "Thank you to the leaders and healthcare professionals at DHR Health for their efforts to earn this designation and for their outstanding service to this community. As we work to build a healthier future for this region ― and all of Texas ― we must also address the rising cost of insulin, which is having a significant impact on the Rio Grande Valley. That is why I am proud to have signed Senate Bill 827, bringing major financial relief to Texans with diabetes here in the Rio Grande Valley and across the Lone Star State." 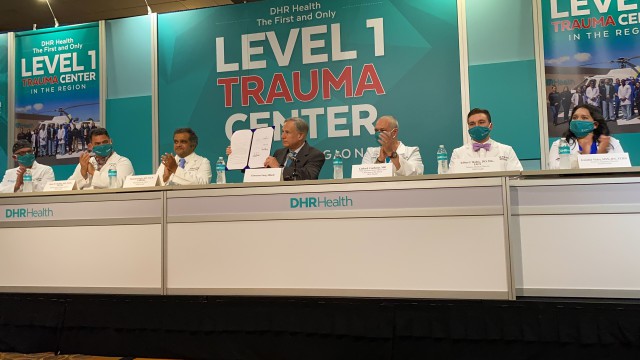