Governor Greg Abbott today delivered remarks on state response efforts to combat drug overdoses and protect the lives of Texans at the 2022 Annual Montgomery County Overdose Awareness Day Event hosted by the Montgomery County Overdose Prevention Endeavor (M-COPE) in The Woodlands. As deadly drugs like fentanyl pour across President Biden’s open borders, the Governor reiterated that the State of Texas is working to fight the epidemic and announced new initiatives to combat the opioid crisis. Governor Abbott also announced his support for passing a law that would ensure dealers who provide drugs laced with deadly opioids are charged for murder when their product poisons innocent Texans.

“Even though some of the friends and family members we have honored here tonight are no longer with us, they are never gone,” said Governor Abbott. “Sadly, this is a phenomenon that can be prevented if we all work together and if our federal government gets serious about protecting its citizens by securing our border. Substance abuse is a lifelong battle for many. We should muster every tool and every effort to help our fellow Texans negotiate the perils of addiction and emerge drug-free and healthy.”

Addressing the crowd of more than 300, Governor Abbott noted that in Texas nearly 1,700 fentanyl-related deaths were reported in 2021 alone. As part of an ongoing effort to combat the epidemic, the Governor signed a law last year that increases criminal penalties for making or distributing fentanyl.

Prior to addressing event attendees, Governor Abbott met with M-COPE Directors Sarah Hall, Sherry Barton, Kathy Posey, and Kimberly Rosinski, who have each lost a son due to accidental overdose, to discuss their organization's ongoing efforts to combat drug overdoses and help those who have lost a loved one to overdose. The Governor was joined at the event by Montgomery County Judge Wayne Mack, County Lieutenant Brian Luly, and County Sheriff Rand Henderson.

M-COPE is an advocacy group of parents, spouses, siblings, children, and friends who have been affected in some way by overdose. M-COPE educates and brings awareness to substance use disorders and growing overdose deaths to help prevent drug-related loss in the community. 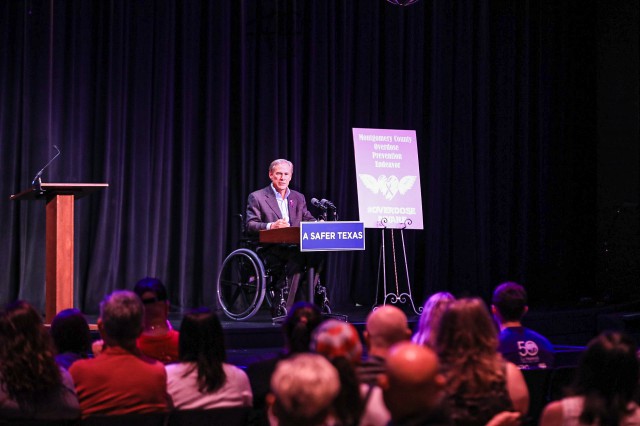