Governor Greg Abbott today announced that the City of Dumas, having completed the multi-step training and certification process, has been designated as a Film Friendly Texas community by the Texas Film Commission. For more than 50 years, the Texas Film Commission has helped grow local jobs and economies by promoting the Lone Star State as the premier destination for film, television, commercial, animation, visual effects, video game, and extended reality (XR) production.

“I congratulate the City of Dumas on earning the Film Friendly Texas designation and joining more than 160 other Texas communities that have received this recognition,” said Governor Abbott. “The Lone Star State is brimming with promise, and I look forward to continuing to work alongside all of our communities to ensure they have the knowledge and tools needed to succeed. Through the Film Friendly Texas training and certification process, communities large and small are readied to help match local businesses with production-related needs, creating jobs for Texas-based crew members and local residents, as well as spurring on-site spending at local small businesses. I am proud of all the Texas Film Commission has accomplished in helping communities like Dumas market their unique appeal and support local job creation through media production.”

“It is no secret that the natural beauty of the Texas Panhandle, with its spectacular views, stunning sunsets, and friendly people is attractive to film making,” said State Representative Four Price. “Congratulations to the City of Dumas for achieving the Film Friendly Texas designation. Movies produced in Texas film-certified communities have significant and positive economic impacts on both the local and state economies."

“Being designated as a Texas Film Friendly Community is so important on so many levels,” said Carl Watson, Executive Director, Dumas/Moore County Chamber of Commerce & Visitors Center. “The economic impact provided by the film media industry, whether it be a motion picture, or commercial, is one that has a ripple effect, providing revenues for so many members of a community; the lasting effect will continue to provide benefits for years to come. We are excited to be able to work with the Texas Film Commission to help promote Texas as the place to bring these great projects.”

“Being considered a Texas Film Friendly Community is very exciting for us,” said Michael Running, Executive Director, Dumas Economic Development Corporation. “This tool provides us another means to attract interest from producers seeking locations for their creative media projects. This has been a targeted industry for us due to the economic impact and reputational investment they provide for our community, not to mention the other intangible benefits our community will receive.”

The City of Dumas in the Panhandle region joins more than 160 Film Friendly Texas communities from across the state that receive ongoing training and guidance from the Texas Film Commission on media industry standards, best practices, and how to effectively accommodate on-location filming activity in their community.

The Texas Film Commission in the Governor’s Office of Economic Development and Tourism has attracted $1.95 billion in local spending and created more than 183,000 production jobs across the state from 2007 to 202​2. 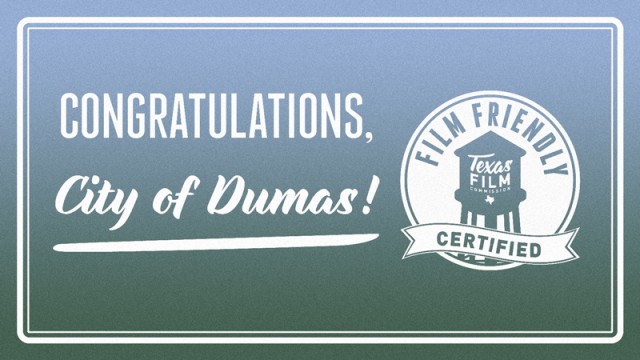