Governor Greg Abbott today announced that the City of Saint Jo, having completed the multi-step training and certification process, has been designated as a Film Friendly Texas community by the Texas Film Commission. For more than 50 years, the Texas Film Commission has helped grow local jobs and economies by promoting the Lone Star State as the premier destination for film, television, commercial, animation, visual effects, video game, and extended reality (XR) production.

“I congratulate the City of Saint Jo on earning the Film Friendly Texas designation and joining more than 160 other Texas communities who have received this recognition,” said Governor Abbott. “The Lone Star State is brimming with promise, and I look forward to continuing to work alongside all of our communities to ensure they have the knowledge and tools needed to succeed. Through the Film Friendly Texas training and certification process, communities large and small are readied to help match local businesses with production-related needs, creating jobs for Texas-based crew members and local residents, as well as spurring on-site spending at local small businesses. I am proud of all the Texas Film Commission has accomplished in helping communities like Saint Jo market their unique appeal and support local job creation through media production.”

“I want to congratulate Saint Jo on their designation as a Texas Film Friendly community,” said U.S. Congressman Ronny Jackson. “The Texas Film Commission has a proud history of enriching communities like Saint Jo by bringing jobs and bolstering economic development. Saint Jo is a worthy recipient of this designation for its business-friendly atmosphere and beautiful scenery as the Heart of the North Texas Hill Country. I am proud to represent the vibrant town of Saint Jo and look forward to seeing their landscape in upcoming productions.”

"Congratulations to the City of Saint Jo for their Film Friendly Texas designation by the Texas Film Commission,” said Representative David Spiller. “Saint Jo is an outstanding community, and this designation will only enhance their city's unique charm and economic growth.”

"Saint Jo is working hard to be a town where businesses and dreams can thrive," said Senator Drew Springer. "The Film Friendly Texas certification adds yet another tool in the toolbox. Congratulations to the City of Saint Jo for this achievement."

“Saint Jo has been an oasis on the prairies sea for almost 150 years,” said former Saint Jo Mayor Tom Weger. “Authentic Texas is what you find when you come to Saint Jo. Any film industry project that desires to capture the essence of this great state of ours would be drawn immediately to our town. Saint Jo will finally be able to show off its beautiful downtown square, historic buildings, rolling vistas, and Texas roots. I can’t imagine a better partnership.”

“Saint Jo deserves to be recognized by the Texas Film Commission,” said actor, musician, and storyteller Red Steagall. “Saint Jo has a rich history in North Texas from the days of the Chisholm Trail to the present. Saint Jo is full of smiling, friendly folks eager to help anyone who asks for assistance. Everyone will enjoy their visit to Saint Jo.”

The City of Saint Jo in Montague County joins more than 160 Film Friendly Texas communities from across the state that receive ongoing training and guidance from the Texas Film Commission on media industry standards, best practices, and how to effectively accommodate on-location filming activity in their community.

The Texas Film Commission in the Governor’s Office of Economic Development and Tourism has attracted $1.95 billion in local spending and created more than 183,000 production jobs across the state from 2007 to 2022. 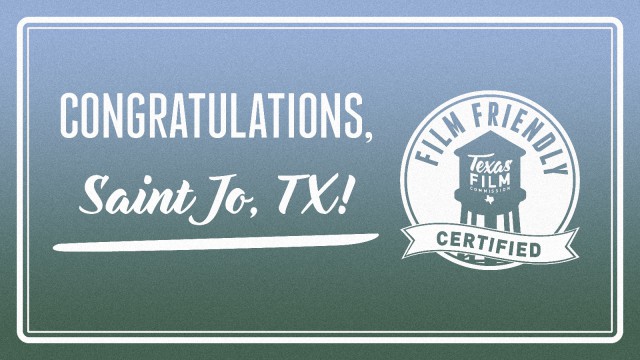