First Lady Cecilia Abbott, Honorary Chair of the 2018 Governor’s Volunteer Awards, hosted a reception at the Governor’s Mansion last night honoring the fifteen winners of the 2018 Governor’s Volunteer Awards. In their 35th year, the awards - presented in conjunction with OneStar Foundation - honor individuals and organizations in Texas that have gone above and beyond to enrich the lives of those in their communities and throughout Texas through volunteerism and service.

“I am inspired by the trails blazed and opportunities created by this year’s Governor’s Volunteer Award winners,” the First Lady said. “The true strength of the Lone Star State is found in our people, and these award recipients are a powerful testament to the character of Texas. Greg and I look forward to continuing to work with all of them to make our state even greater.”

In addition to the standard Governor’s Volunteer Award categories, this year three new categories were added to honor Texas women who have been instrumental in furthering the three key priority areas of the Governor’s Commission for Women, which are advancing economic opportunities for Texas women, addressing the scourge of human and sex trafficking, and engaging Texas businesswomen in Hurricane Harvey rebuilding efforts.

The recipients of the 2018 Governor’s Volunteer Awards are:

John Poston’s passion to serve the special needs community began with the birth of his twins in 1995, one of which was born with Down syndrome. Out of John’s amazing commitment and relentless pursuit of opportunities and happiness for his children came The Rise School of Dallas, The TouchDown Club of Dallas, The Stallings Award, and Daymark Living. Through his many years of service, John has helped provide for the needs of hundreds of children and adults with intellectual disabilities in Texas and beyond.

17-year-old ZeeShawn Wani is an outstanding student at Michael E. DeBakey High School for Health Professionals in Houston, but what makes him even more exceptional is his heart for service. In 2015 he co-founded Student for Cause to help economically disadvantaged students by providing necessary uniforms, school supplies, and supporting their participation in extracurricular activities.  After Hurricane Harvey hit Houston, Student for Cause raised additional funds to provide for students in need.

United Way of San Antonio and Bexar County’s MISSION UNITED Information and Referral program is a veteran peer-to-peer support model that was formed to help the military and veteran community achieve and maintain self-sufficiency. In collaboration with the Department of Family and Protective Services and 76 Bexar County agencies, MISSION UNITED navigators can identify a multitude of direct and wrap-around services, enabling city and state, for-profit and nonprofit, military and civilian agencies to put resources where they are most needed.

Through its employee volunteer program, Fidelity Cares, Fidelity Investments has been a powerful partner to school districts and nonprofit organizations in the DFW area. Whether it is teaching financial literacy in schools, partnering with local nonprofits to solve technology challenges, or mentoring youth through career and STEM initiatives at the Boys and Girls Clubs of Greater Tarrant County, Fidelity Investments is making a real difference in the communities it serves.

TeamCITGO has a 30 year history of volunteerism and support in the communities it calls home, including Corpus Christi and Houston. After Hurricane Harvey made landfall, TeamCITGO mobilized teams to clean up communities and gather and distribute donations. Organizations that benefit from TeamCITGO’s investment of time and resources include Habitat for Humanity, the Muscular Dystrophy Association, and the American Heart Association. TeamCITGO is a stellar example of how a corporation can truly make a difference beyond the bottom line.

When Marissa Vogel’s children were 4 and 6 years old, she searched for opportunities to get them involved in giving back. Unable to find opportunities that engaged children in meaningful service, in 2009 Marissa founded Little Helping Hands to engage youth of all ages in service. Now known as Generation SERVE, in the last nine years Marissa’s vision has helped over 34,000 youth and their families get involved in volunteering, contributing 78,500 volunteer hours to over 100 nonprofit organizations in Central Texas.

In 1995, several San Angelo teens from Johnson Street Church of Christ traveled to Atlanta to serve the homeless and forgotten.  When they returned home, they realized that there was great need in their own community. Thus began Rust Street Ministries, a community outreach ministry providing basic needs and life skills for those in San Angelo and surrounding areas. Through the generous support of many community partners and 23 area churches, all of Rust Street Ministries’ services are provided at no cost.

Katy Bourgeois was on the original team that designed and launched The Travis County Collaborative for Children, and she continues to provide strategic guidance, coordination and support for over 35 organizations that make up the Collaborative. This trauma-informed community of support is focused on three primary goals: a healing, local family for every child in need, two or fewer placements for every child, and a positive, permanent placement within two years or less.

Linda and Ron Aten began volunteering in the Senior Corps RSVP program in Abilene in 2001 and have since accumulated over 11,000 hours of volunteer service. Together they have served through 36 different agencies; however, it is the AARP Tax Aide Program where their major volunteer service is focused. Ron has been a tax counselor since 2006 and Linda has served as the District Coordinator since 2011. In 2017, the Abilene District prepared over 1,500 tax returns at no cost and gave back to community residents over $460,000 in earned income credit and $223,584 in tax refunds.

Sara Lamog was instrumental in making Tom Green County the second county in Texas to be certified as an ACT Work Ready Community.  Sara has served with the Work Ready Project for the City of San Angelo Development Corporation, a program designed to decrease unemployment and create a more prepared workforce. Under her leadership, the Work Ready team secured commitments from over 122 local employers to support and utilize the ACT Work ready skill assessments.

David Porter’s service with Breakthrough Central Texas – a nonprofit that aims to assist students from low-income communities who will be the first in their families to graduate from college – has resulted in the development of a partnership that will continue to serve Breakthrough students long after David’s AmeriCorps term of service ends. David partnered with Dell Medical School at the University of Texas at Austin, which hosted a mini camp for Breakthrough’s first-generation rising high school juniors.

As a survivor of child trafficking, Toni McKinley incorporates her personal experiences into her knowledge as a licensed professional therapist to educate first responders and assist victims of trafficking through a trauma-informed, evidence based approach. Toni is active with many organizations and agencies that work to stop trafficking and rehabilitate girls who have been victimized, including The Refuge, Shared Hope International, Crowns of Hope, and Survivor Sisters Leadership Program.

As the co-founder and publisher of the South Belt-Ellington Leader, Marie Flickinger ensured that her community received timely updates and knew where to find resources in the aftermath of Hurricane Harvey. Marie worked with the Pasadena Independent School District and other community supporters to set up a temporary shelter at Dobie High School, which fed and housed 1,500 displaced Texans. Marie also coordinated supplies from the American Red Cross and helped manage more than 150 volunteers at the temporary shelter.

Roslyn Dawson Thompson is a lifelong philanthropist and advocate for the empowerment of women and girls. As the president and CEO of the Dallas Women’s Foundation, Roslyn developed and executed a strategic plan that emphasized supporting female-led households to help them achieve economic security. Roslyn is also the chair of the board of the Women’s Funding Network and serves on the executive committee of Prosperity Together, an initiative of 27 public women’s foundations that have committed over $100 million to advance women’s economic security in the U.S. over the next five years. 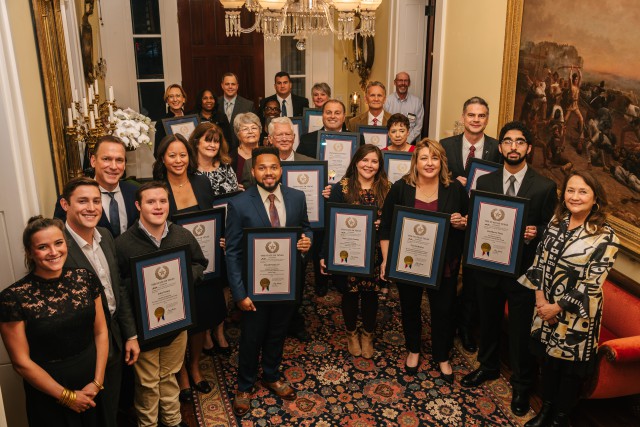