“The devastation caused by Hurricane Harvey required a Texas-sized response, and I am incredibly proud of how the people of Texas came together to respond to this challenge even as rebuilding continues to this day,” said Governor Abbott. “Once again, Texans have shown that no force of nature is more powerful than the Texas spirit. I thank Texas A&M University System Chancellor John Sharp, who served as chairman, as well as Chief Nim Kidd of the Texas Division of Emergency Management and all of the members of the Commission to Rebuild Texas for their invaluable leadership. As this detailed and forward-thinking report shows, Texas continues to be a leader in disaster response. And by working together to implement the Commission’s recommendations, we will ensure that Texas is better prepared to respond to and mitigate damages from future natural disasters.”

“Texas enjoys the best rescue operation in the nation because our first responders train year-round,” said Chancellor Sharp. “It is important that we treat disaster recovery with the same commitment, and that we train and prepare our local and state officials to deal with the maze of recovery issues. The next natural disaster is a question of when, not if.”

Among the recommendations in the 178-page report, “Eye of the Storm,” based on lessons learned during the response to Hurricane Harvey, the State of Texas should:

• Form an ongoing recovery task force made up of county extension agents as well as staff from appropriate state agencies and nonprofit organizations;

• Maintain a single, well-publicized State website for post-disaster information as well as investigate better use of 911, social media and mobile apps to communicate with the public and local officials;

• Expand the role of the Texas Department of Transportation in debris removal, a first during Harvey recovery, after future catastrophic storms; and

• Create a case management program at the state level to replace the federal version to speed up the response to individual needs.

The Commission also recommends that the Texas Division of Emergency Management be integrated into the extensive emergency management functions currently performed by The Texas A&M University System to improve the training of local officials in disaster assistance, emergency management training, mitigation and preparedness planning, and emergency response.

Other recommendations offered in the report will require the cooperation of Congress and the federal government, including the creation of a single intake form and an automated intake system so disaster survivors do not have to fill out so many applications for services.

The Governor’s Commission also looked at the need to future-proof the state’s infrastructure. The report recommended prioritizing more than 4,000 potential projects and establishing a study committee to evaluate and propose options for a state-local partnership to help future-proof Texas against flood events on a watershed basis.

The Commission will conduct a legislative briefing at 3:00 pm today. A livestream will be available on the Texas A&M University System's Facebook page. 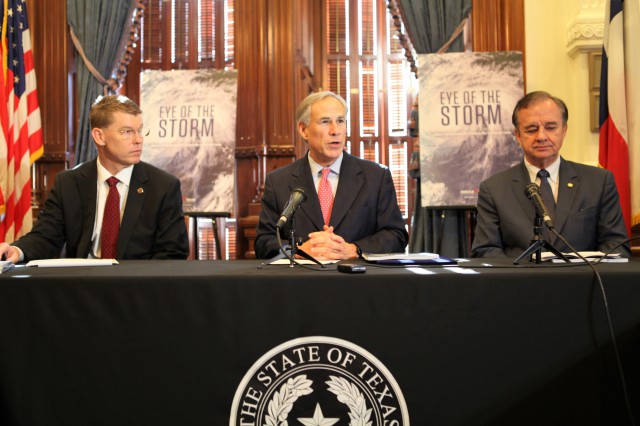