Since the launch of Operation Lone Star, the multi-agency effort has led to more than 287,000 migrant apprehensions and more than 17,700 criminal arrests, with more than 15,100 felony charges reported. In the fight against fentanyl, DPS has seized over 325 million lethal doses throughout the state.

“Mayor Adams’ problem is not with Texas. It is with President Biden’s refusal to stop this border crisis and secure our southern border,” said Governor Abbott. “A crisis that has overrun and overwhelmed our border towns and communities across our state, whose requests for help have gone ignored and unanswered by the Biden Administration.”

DPS Lt. Chris Olivarez joined Fox News’ Neil Cavuto to respond to criticism of Governor Abbott’s migrant busing mission, which has sent thousands of migrants to Washington, D.C. in an effort to provide relief to overrun border communities. He noted Governor Abbott has had to step in and provide the needed resources and tools to law enforcement agencies to combat smugglers and mass migration.

“If those mayors from New York and Washington, D.C. really want to get to the root cause of this whole situation, they need to voice their concerns to the federal government, which has completely neglected to secure the border,” said Lt. Olivarez. “Here at the southern border, we’ve been seeing 7,000 to 8,000 immigrants coming across every single day, and that’s overwhelming the limited resources of these smaller border communities such as Eagle Pass and Del Rio.”

“The border is not secure when you’re seeing in the Rio Grande Valley sectors mass migration of people who are just wandering across the border,” said Sgt. Couch. “That is a misnomer of a statement that has no truth in it.”

A DPS highway patrol trooper stopped a commercial motor vehicle for a safety inspection in Starr County and discovered 42 lbs. of cocaine. The Freightliner semi-trailer was stopped on U.S. 83 in Rio Grande City, and during a roadside interview the trooper determined inconsistencies with the driver’s destination and cargo. The vehicle was escorted to the Pharr Port of Entry for further inspection, which resulted in the discovery of 15 bundles of cocaine hidden in an aftermarket compartment inside the trailer.

The driver was arrested and charged with possession of a controlled substance. The seized drugs have an estimated street value of $345,000.

A total of 15 illegal immigrants were apprehended and referred to Border Patrol. It was later discovered the vehicle was a cloned water utility work truck.

DPS troopers located two separate stash houses in Laredo this week containing dozens of illegal immigrants. On Sunday, DPS special agents and troopers noticed suspicious activity in an apartment complex in central Laredo. After further investigation, 60 illegal immigrants, including three minors, were found inside an apartment. All individuals were from Guatemala and were being concealed in harsh living conditions. The illegal immigrants were referred to Border Patrol, and a collaborative investigation between Border Patrol and DPS is under way.

National Guard soldiers near Laredo work with DPS and Border Patrol to interdict and apprehend illegal immigrants. Using an Android Team Awareness Kit (ATAK), a smartphone digital mapping and military situation awareness app, soldiers are able to view exactly where they are and locate certain points to help navigation their area of operations.

DPS troopers were led on a high-speed pursuit near Laredo before a smuggler and four illegal immigrants eventually bailed out of the vehicle and ran toward the brush.

The smuggler was charged with evading arrest and the smuggling of persons. The four illegal immigrants were apprehended and referred to Border Patrol.

The Texas National Guard has observed a decline in illegal crossing volume within its focus area in the Rio Grande Valley region. Soldiers have seen a drop in river crossings and at land points in the region. Soldiers are remaining vigilant and continue to work with DPS and other law enforcement partners to interdict and apprehend illegal activity in the largely agricultural region.

The Guard said the decline in numbers could be a waiting game or an example that the combined resources and tactics with law enforcement partners are having an impact on illegal activity. 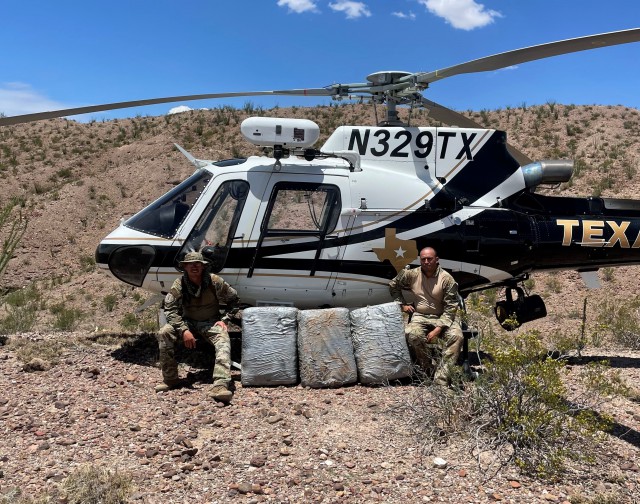