Since the launch of Operation Lone Star, the multi-agency effort has led to more than 274,000 migrant apprehensions and more than 16,900 criminal arrests, with more than 14,200 felony charges reported. More than 5,700 weapons and more than $43 million in currency have been seized.

Governor Abbott issued an executive order on Thursday, July 7 authorizing and empowering the Texas National Guard and DPS to apprehend illegal immigrants who illegally cross the border between ports of entry and return them to the border. This executive order comes after the Biden Administration's decision to end Title 42 expulsions and the Remain-in-Mexico policy, leading to historic levels of illegal crossings. 5,000 migrants were apprehended over the July 4th weekend, creating a border crisis that has overrun communities along the border and across Texas.

On Wednesday, July 6, Governor Abbott announced that his Public Safety Office (PSO) is providing an additional $30 million in Operation Lone Star grant funding for Texas cities and counties to enhance border security operations, including funding to help deter and interdict criminal activity related to the border crisis. This funding is part of the $100 million Operation Lone Star Grant Program funded by the legislature and launched by the Governor in September 2021.

In an interview with David Asman on Fox Business, Former Acting Director of ICE Tom Homan slammed the Biden Administration for attacking the State of Texas for stepping up in the federal government's absence to secure the border and protect communities. "Governor Abbott has done more to secure our border and not only defend Texas, but defend the United States," said Former Acting Director Homan. "Governor Abbott is a hero."

Governor Abbott joined Larry Kudlow on Fox Business where he elaborated on his latest executive order authorizing the Texas National Guard and DPS to apprehend and return illegal immigrants to the border who illegally cross between ports of entry from Mexico into Texas.

A human smuggler led a DPS trooper on a high speed pursuit towards the Rio Grande in Mission on Friday, July 1. The smuggler and upwards of 20 illegal immigrants bailed out of the vehicle once it reached the riverbank and swam towards Mexico. Two illegal immigrants were apprehended and referred to U.S. Border Patrol.

A four-man team of Texas Air National Guardsmen stood watch along the Texas-Mexico border as 4th of July celebrations were taking place nearby. This security point is one of many along the Rio Grande to assist state and local law enforcement partners in deterring illegal entry into the United States and disrupting transnational criminal activity. During their watch on July 3, the Airmen assisted with the apprehension of nearly 20 illegal migrants.

Texas Army National Guardsmen deterred or apprehended nearly 800 illegal migrants along a 15-mile stretch of land near Laredo between June 28 and July 5. Most of the 800 migrants were caught actively attempting to evade detection by hiding within Laredo residential neighborhoods or by trekking across private ranch land. During one apprehension, an illegal firearm was discovered on one of the migrants. In another apprehension, it was discovered that some migrants had been captured only days before in the same area after being processed by federal agencies.

The Texas National Guard continues to conduct riverine night operations, maintaining patrols along the Rio Grande using zodiac boats to turn back and apprehend illegal migrants across multiple zones in the Texas border region. Since launching the boats in March, and starting night operations in June, the Guard has turned back and referred over 200 migrants attempting to cross into Texas illegally. 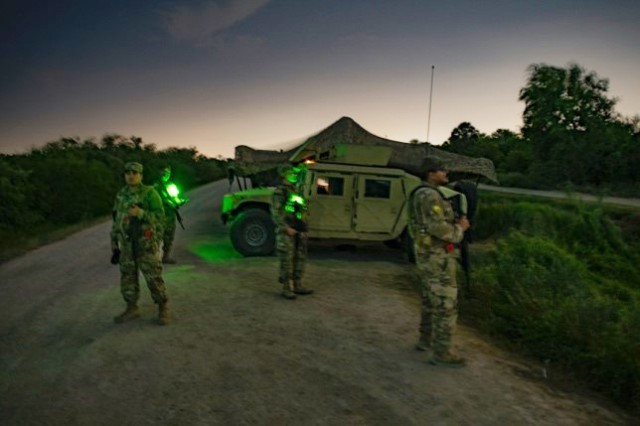