Governor Greg Abbott today signed House Bill 9 into law, which will provide an additional $1.8 billion in state funding for border security over the next two years. The Governor signed the legislation at the Fort Worth Police Officers Association (FWPOA) headquarters and was joined for the ceremony by the bills authors, Senator Jane Nelson and Representative Greg Bonnen, Lieutenant Governor Dan Patrick, FWPOA President Manny Ramirez, and other members of the legislature.

"Our border crisis goes beyond the Rio Grande Valley and our South Texas communities — the smuggling of drugs, people, and weapons reaches far and wide throughout our state, and it affects all of us," said Governor Abbott. "That is why border security funding is crucial to our efforts to keep the entire state of Texas safe and secure. This funding will provide our agency partners with even more support to address the influx of unlawful migrants and prevent dangerous people and contraband from entering our state. I thank Senator Nelson, Representative Bonnen, and the entire state legislature for ensuring that this important bill made it to my desk. I am proud to sign House Bill 9 into law and will continue to work tirelessly to secure our border and protect the people of Texas."

Governor Abbott made border security funding a priority for the first and second special legislative sessions. The Governor launched Operation Lone Star in early March to help secure the border and combat the smuggling of people and drugs in Texas. There are currently DPS troopers, agents, Guardsmen, and rangers, who are engaged in the mission and working with local law enforcement. The Governor expanded the mission shortly after its launch to include anti-human trafficking efforts. Governor Abbott's plan to secure the border also includes strategic fencing, barriers, and the construction of a border wall. A project manager for the initial stage of building the wall was announced yesterday. 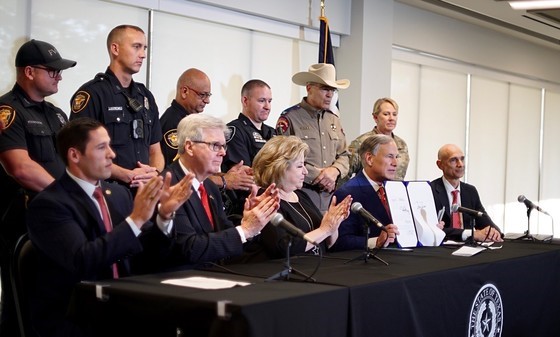