Since the launch of Operation Lone Star, multi-agency efforts have led to more than 252,000 migrant apprehensions, along with more than 15,000 criminal arrests — and more than 12,00 felony charges. Over 5,000 weapons and over $40 million in currency have been seized. In the fight against fentanyl, DPS has seized over 344 million lethal doses throughout the state.

Governor Abbott activated the Joint Border Security Operations Center (JBSOC) and directed DPS, TMD, and Texas Division of Emergency Management to coordinate Texas' response to secure the border in preparation for President Biden's reckless decision to end Title 42 expulsions on Monday, May 23. The JBSOC is activated to its highest alert level as the Biden Administration has estimated that the end of Title 42 expulsions will lead to up to 18,000 illegal crossings per day from Mexico into the United States.

Governor Abbott joined Jesse Watters on Fox News to provide an update on Texas' preparations for the anticipated mass surge of illegal crossings as the Biden Administration continues to push forward with the President's decision to eliminate Title 42 expulsions on Monday, May 23.

WATCH: Governor Abbott On The Ending Of Title 42: "We're Talking About Total Chaos Caused By The Biden Administration"

Governor Abbott tells Newsmax's Greg Kelly that the Biden Administration would be causing "total chaos" at the border by lifting Title 42 expulsions, allowing 6 million illegal crossings per year from Mexico into the United States.

"Texas is taking unprecedented action to secure the border because Biden refuses to enforce the immigration laws passed by Congress," said Governor Abbott in a tweet responding to reporter Ali Bradley. Bradley confirmed with DPS that Mexican authorities will come to Texas to be trained by the Texas Military Department on how to install razor wire in areas of interest. Mexican authorities will take the materials back across the border to install in an effort to stop illegal immigration across the Texas-Mexico border.

WATCH: DPS Lt. Chris Olivarez Wants Biden Administration To Know "It's One Thing To Have A Plan On Paper, But You Have To Effect It" To Secure The Border

DPS Lt. Chris Olivarez joined Charles Payne on Fox News earlier this week to share insight on current migrant crossings at the border and provided an update on binational efforts between Texas and Mexico to secure the border. "It's one thing to have a plan on paper," said Lt. Olivarez on DHS Secretary Mayorkas' most recent visit to McAllen. "But you have to effect it."

Operation Lone Star continues to conduct binational operations with Mexican authorities along the Rio Grande. From the Rio Grande Valley to Eagle Pass, Operation Lone Star is working alongside law enforcement on the Mexican side of the border in preparation for the mass influx of illegal immigration, weapons, drugs, and other illegal contraband anticipated to come into the United States when Title 42 expulsions end on Monday.

During a commercial vehicle safety inspection in Laredo, a DPS trooper arrested the driver of a semi-truck who was attempting to smuggle five illegal immigrants from Mexico into Texas.

In a Fox News exclusive, correspondent Bill Melugin joins DPS Sgt. Jimmy Morris on the ground in tracking down illegal immigrants and drug smugglers. Melugin and Sgt. Morris found bundles of illegal drugs and, with the help of U.S. Border Patrol, smugglers hiding in a bush.

Texas Air National Guardsmen assigned to Operation Lonestar in Brownsville continue to conduct security point operations along the Rio Grande. The security points are responsible for spotting illegal border crossings and other criminal activity along the river. Once the illegal activity is identified, the guardsmen alert other Texas Military Department patrols in conjunction with law enforcement partners to interdict and apprehend the criminal elements.

The Texas National Guard Tactical Response Unit (TRU) continues to patrol along the Rio Grande. The TRU employs multiple types of maritime boats and equipment to maneuver along the river. The boats rely on speed and shallow water capabilities to interdict illegal border crossings and criminal elements. The guard boat unit patrols the Rio Grande alongside DPS and serves as a force multiplier to secure Texas on the frontlines. 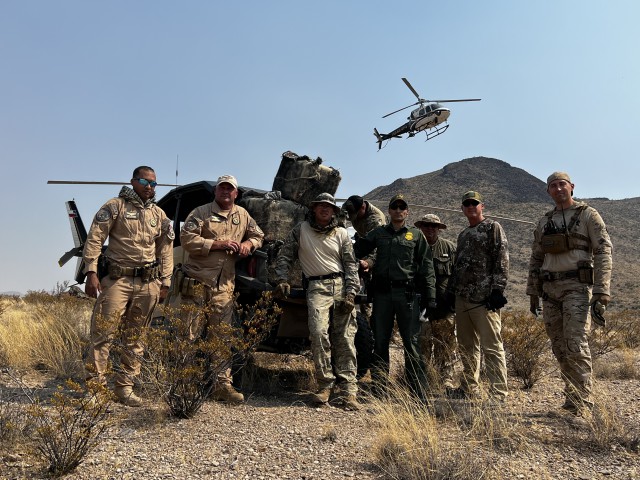