Governor Greg Abbott today announced the first in a series of aggressive actions by the State of Texas to secure the border in the wake of President Biden's decision to end Title 42 expulsions. The Governor made the announcement at a press conference in Weslaco, where he was joined by Texas Department of Public Safety (DPS) Director Steve McCraw, Adjutant General of Texas Maj. Gen. Thomas Suelzer, and Texas Division of Emergency Management (TDEM) Chief Nim Kidd.

"The Biden Administration's open-border policies have paved the way for dangerous cartels and deadly drugs to pour into the United States, and this crisis will only be made worse by ending Title 42 expulsions," said Governor Abbott. "With the end of Title 42 expulsions looming next month, Texas will immediately begin taking unprecedented action to do what no state has done in American history to secure our border. The new strategies announced today and next week will further strengthen our already robust response to the Biden border disaster, and we will use any and all lawful powers to curtail the flow of drugs, human traffickers, illegal immigrants, weapons, and other contraband into Texas."

During his remarks, Governor Abbott noted that the U.S. Department of Homeland Security (DHS) is projecting as many as 18,000 migrant apprehensions per day upon the end of Title 42 expulsions. This prediction would indicate over half a million illegal border crossings per month.

Because DHS has no plan for addressing the anticipated surge of illegal immigrants when Title 42 expulsions end, and because DHS is expected to release large groups of migrants into Texas communities, Governor Abbott has directed TDEM to charter buses and flights to transport migrants who have been processed and released from federal custody to Washington, D.C. To board a bus or flight, a migrant must volunteer to be transported and show documentation from DHS. Mayors and county judges can notify TDEM of any DHS-facilitated drop-off of migrants in their communities so that the agency can provide appropriate transportation.

Governor Abbott has also directed DPS to conduct enhanced safety inspections of vehicles as they cross international ports of entry into Texas. This directive, which is effective immediately, anticipates a significant rise in cartel-facilitated smuggling via unsafe vehicles upon the end of Title 42 expulsions.

Governor Abbott announced additional strategies being deployed immediately to secure the border. DPS and the Texas Military Department (TMD) are preparing additional boat blockades, deploying razor-wire at low-water crossings and high-traffic areas, and installing container blockades to stem the flow of illegal crossings. Additionally, TMD will begin the first phase of mass-migration rehearsals this week, and all DPS troopers and specially trained Texas National Guard soldiers will be given riot gear in case of violence among caravans and migrants.

The State of Texas will continue to evaluate the threat posed by the end of Title 42 expulsions and announce additional action in the coming weeks to respond to the expected surge in illegal immigration. 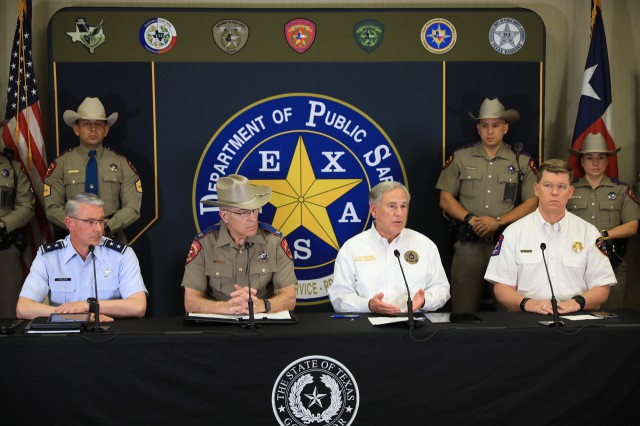