Across the diverse geography of Texas, our state specializes in its own unique array of advanced industries, where specific infrastructure and industry knowledge has developed and continues to evolve.

The industries across the Lone Star State allow companies and their workforce boundless opportunities for success.

A leader in advanced technologies, Texas is a popular destination for the world's most innovative manufacturing companies. In fact, the Lone Star State has been the top high-tech exporting state for nine consecutive years with goods valued at more than $50 billion in 2021, solidifying “Made in Texas” as a powerful global brand.

Over the last decade, Texas has targeted diversified development in advanced manufacturing and related sectors. The state is home to multiple segments of the industry—everything from computer and electronic goods to motor vehicle and parts manufacturing to food and beverage production.

Increasingly known as the manufacturing capital of the nation, Texas is no stranger to attracting large, high-tech manufacturing operations. An abundance of available resources and affordable real estate serves as a major draw for companies looking to relocate or expand. The state’s robust network of transportation infrastructure allows companies direct access to domestic and international markets and the ability to easily ship products around the globe. Texas is a manufacturing mecca where today’s products are made and tomorrow’s technologies are brought to life.

Advanced manufacturing companies with a strong presence in Texas:

As home to the headquarters for two international airlines, two of the world’s busiest airports, 15 active military bases and NASA’s world-famous Johnson Space Center, Texas is one of the most important locations for the global aerospace and aviation industry. The broad range of aerospace activities in Texas includes fighter planes and helicopter assembly, navigation instrument development, advanced space-flight research, military pilot training and commercial space travel.

This industry has a substantial presence in many regions of the state. In North Texas, the Dallas-Fort Worth region boasts the state’s largest concentration of aerospace manufacturing workers, as well as the headquarters of American Airlines and Southwest Airlines. San Antonio, known as “Military City, USA”, is home to tens of thousands of U.S. Air Force personnel and is a national hub for aircraft maintenance, repair and overhaul (MRO).

On the Gulf Coast, Houston is the legendary home to NASA mission control and dozens of related spaceflight contractor firms. Elsewhere in the state are manufacturing facilities for various Fortune 500 aerospace companies, hundreds of major Fixed Base Operators (FBOs), numerous defense contractors and trailblazers in commercial space tourism.

Aerospace, aviation and defense companies with a strong presence in Texas include:

Home to thousands of life science and research firms, Texas is one of the leading biotech states in the country. The state’s highly trained workforce, top-tier research institutions and business-friendly climate strengthens our status as a global life science industry leader. The Lone Star State is home to the world’s largest medical center, the Texas Medical Center (TMC), one of the nation’s best children’s hospitals, the Texas Children’s Hospital, and the world’s largest cancer hospital, MD Anderson Cancer Center.

For decades, Texas has been a center for groundbreaking medical research, with a robust network of academic and research institutions, including seven of the nation’s top 125 medical schools and $6.6 billion in annual research and development expenditures. The Governor’s University Research Initiative (GURI) was created to bring the best and brightest researchers in the world to the Lone Star State.

Additionally, the Cancer Prevention and Research Institute of Texas (CPRIT), a state-funded initiative which is leading the state’s unprecedented fight against cancer, has been instrumental in positioning Texas as a world-class leader in cancer research and prevention. The state’s innovative companies, medical centers and institutions of higher learning continue to keep Texas on the cutting edge of discovery in the biotech and life sciences sector.

Biotechnology and life sciences companies with a strong presence in Texas include:

Since the discovery of the Spindletop oilfield in 1901, Texas has been a leader in energy production. Today, Texas is the top energy producer in the nation and is set to become the energy capital of the world—for both traditional and renewable sources. Texas’ geography and natural resources, excellent transportation systems, highly skilled labor force and leadership in environmental research give the state a significant energy advantage.

Texas leads the U.S. as the top producer of both crude oil and natural gas, with nearly 480,000 miles of pipelines running throughout the state. The state is home to one-fourth of the nation’s proved natural gas reserves and is #2 in total LNG exports. If Texas were a nation, it would be the sixth-largest oil producer in the world.

The Lone Star State’s renewable energy potential is among the largest in the country, with abundant wind, solar and biomass resources found across the state’s geographically diverse regions. In recent years, Texas has built upon its energy experience and highly qualified workforce to take the lead in renewable energy production and services. As a result, Texas has become the top state in wind generation capacity and #2 in biodiesel production. We also produce more electricity than any other state, generating almost twice as much as the second highest-producing state.

Top Texas companies in energy include:

The Lone Star State’s strong, well-established information technology (IT) sector, has given the state a reputation as a tech titan. Innovation in the state’s tech sector has produced everything from the integrated circuit to the handheld calculator. New technologies developed in Texas allow the state to compete in the global IT arena, attracting companies and talent from around the world.

As a testament to the state’s synergies with leaders in technology and innovation, the U.S. Army selected Texas as home for its new Army Futures Command, which focuses on science and technology development for the U.S. Army. Our expertise in IT has fueled targeted efforts of diversified investment in advanced tech manufacturing and related sectors.

Texas’ continued strength in IT and tech is due in large part to the growing pipeline of patents and venture capital funding. For 14 years, Texas has ranked among the top two states for number of technology-related patent assignees. Thanks to world-class universities and academic institutions, which invest heavily in R&D, Texas will continue to lead the future of technology and innovation.

Information technology companies with a strong presence in Texas include:

Texas leads the nation in petroleum refining and is a global leader in petrochemicals. This sector has long played a crucial role in Texas' economy by creating jobs and contributing to our state’s status as the #1 exporter in the U.S.

Texas refineries process almost 5.9 million barrels of crude oil per day, which is 31% of the nation's refining capacity. Because of the significant demand for workers in these areas, the sector employs thousands and creates high-paying jobs. In fact, the state is home to the world’s largest petrochemical cluster with nearly 75,000 people employed in the industry. The largest concentration of these workers is located in the energy capital of the nation—Houston.

More than 50% of the total U.S. chemical production is produced and processed by Texas chemical manufacturers. Chemical companies supply products that are used to make pharmaceuticals, computers, transportation, infrastructure and other everyday items.

Top Texas companies in petroleum refining and chemical include:

Texas’ robust corporate services industry supports growing companies of all sizes. The state’s corporate services workforce is estimated to be more than 1.5 million, with businesses finding specialized labor to meet their needs in all regions of the state. Hundreds of companies each year, including many Fortune 500 firms, choose to move their headquarters or expand corporate operations to Texas, increasing the state’s status as the new headquarters for HQs.

Currently, a total of 53 Fortune 500 companies call Texas home—that's more than any other state. Charles Schwab, Oracle, Hewlett Packard Enterprise, CBRE, NRG Energy, AECOM and Tesla are just a few of the companies that have moved their headquarters to Texas in recent years. Houston boasts one of the largest concentrations of U.S. headquarter locations for companies from around the world.

Included in our corporate services tool box is Texas’ dominance in data services, back office operations and more. The state ranks #2 in the nation for data infrastructure and Dallas-Fort Worth’s data center market has one of the fastest growth rates in the world. The state is also strong in corporate support services such as financial services and IT. Texas is the #2 state for finance and insurance firms, with more than 42,000 establishments. In addition, Texas is among the top tier of U.S. states for doctorates awarded in tech-related fields.

Texas has quickly become a global leader in the creative industry, including music, film, TV, commercial and video game production, among other sectors. Nearly 900,000 Texans are employed in creative arts and culture in the Lone Star State. These sectors not only contribute to our state’s economy, but are also an integral part of our state’s exceptional quality of life.

Texas has a more than 50 years of history in film and television production and continues to maintain its reputation as a premier location for creative media projects. With more than 250 production companies based in Texas, we have a growing media production community and a robust network of resources that attract U.S. and international filmmakers. The Texas Moving Image Industry Incentive Program attracts qualified film, television, animation, VFX and video game production to the state, helping to boost local economies and create new jobs for Texans. The Texas Film Commission offers additional information on the Texas film, TV, commercial and video game industries.

A compilation of some of the State's top accolades and awards.

Texas at a Glance 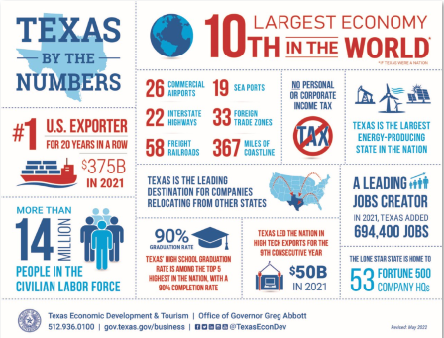