Austin, Texas - A new exhibit from the Texas Archive of the Moving Image (TAMI) takes you along for the journey as Texans travel across the globe in Now Leaving Texas. The exhibit features 30 unique films and videotapes of Texans abroad. From the 1920s until the 1990s, the adventure spans all seven continents and 27 countries.

Whether it be for business or pleasure, Texans truly have ventured to every corner of the globe. What about the Lone Star State did these foreign ambassadors both official and unofficial share with the rest of the world? And what global cultures did Texans encounter and perhaps bring back with them? - Exhibit Curator Katharine Austin.

Now Leaving Texas showcases videos from TAMI’s online collection, featuring rare looks at home movies, promotional and industrial material, and television news coverage. From a Texan at the South Pole to a Dallas family frolicking on a Caribbean beach, the exhibit takes users on a multi-continent foreign voyage. But that’s not all…

“The promotional and industrial films are a real highlight of the exhibition, with Texans not only embarking on overseas adventures but also going out and being professional media makers that capture and share those experiences with an audience. An audience that continues to evolve and encompass new generations thanks to digital preservation at TAMI,” - Elizabeth Hansen, Managing Director.

The exhibit will be showcased in TAMI’s May Archive Dive, the organization's streaming video and conversation program. Watch for more information on our social media channels.

Since 2008, TAMI has partnered with the Office of the Governor’s Texas Film Commission (TFC) to administer the Texas Moving Image Archive Program, providing new access to more than 50,000 films and videotapes as well as educational resources exploring Texas media history.

Learn more about the Program 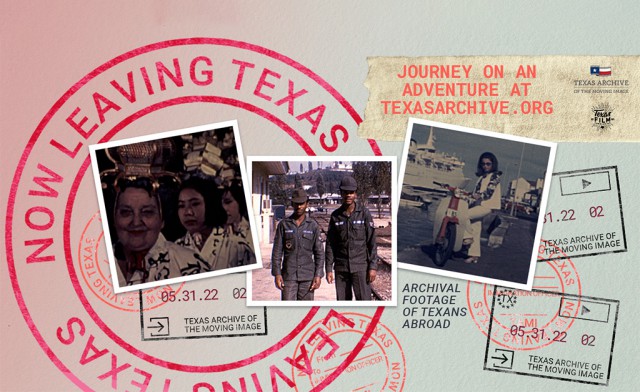