In the News: Film Tourism & ‘Courage Under Fire’

August 5, 1996 | In this news article from the El Paso Herald-Post, writer Juan A. Lozano covers the local tourism & economic impact from the recent filming of the Denzel Washington-starring Courage Under Fire.

Tanks, helicopters and other props from the film were put on display just outside the Cattleman's Steak House for locals to visit and see the massive pieces that were used in the film. The hay rides from Cattleman's Steak House to the location of the props were so popular that an additional day of rides were offered to film fans - nearly 8,500 visitors! Film tourism is a powerful business.

As the newspaper article states, it may have seemed that visitors were halfway across the globe in Iraq, but the desertland of Fabens actually stood in for this location. It's another example of the incredible diversity in Texas topography.

The article also remarks on the incredible economic impact of the production: $20 million spent during the two months of filming in Fabens alone. The studio feature also filmed in Austin, Bastrop, Bertram, El Paso and San Marcos. 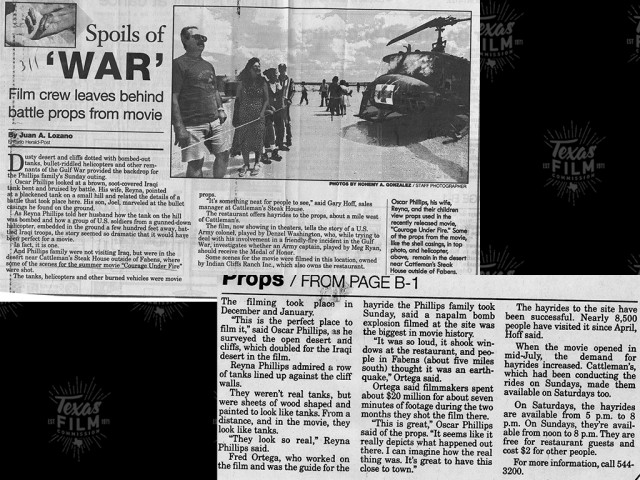