Texas communities far and wide have been the setting for the Western film genre as far back as The Sundowners to present-day TV series like AMC's The Son. The history of Texas Westerns shows how the genre itself has evolved, as well as the communities that have hosted these iconic productions. Whether its popular attractions like the Texas State Railroad or modern communities like Gonzales, there is no denying the Texas landscape as the perfect backdrop for any western. Take your cowboy hat and become an outlaw on the Texas Westerns Film Trail: a journey through the Wild West of Texas productions! 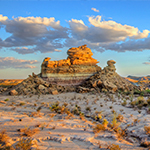 The magnificent landscapes of Big Bend National Park set the scene for many stunning shots found in westerns filmed in Texas. 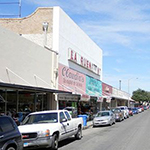 Filmed in the Texas border towns of Del Rio, Laredo, and primarily Eagle Pass, Lone Star is hailed as director John Sayles' masterpiece. It was praised for its accuracy in capturing the zeitgeist of the 90's as well as the culture of life on the Texas border at the time. 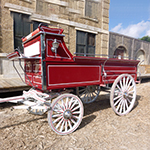 In the Oscar-winning 2010 remake of True Grit, Buggy Barn is introduced in the beginning of the film as Fort Smith, Arkansas, where Mattie Ross (Hailee Steinfeld) arrives to collect her father’s body. Local extras can be seen around the town, riding in their horse drawn wagons that are all era-specific and lending true authenticity to the storytelling. 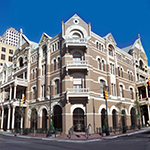 In Season One, the McCullough ranch is at risk of being lost unless an investor can be convinced to help. Eli McCullough (Pierce Brosnan) and his eldest son Phineas (David Wilson Barnes) meet with the potential backer William Philpott (Brett Rice) in the stately lobby and restaurant of the Driskill Hotel in an attempt to win his favor. Tension builds as the financier rudely declines the offer, and Eli daydreams about revenge - a common practice from his past. 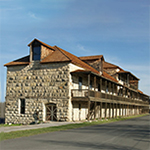 The Fort Clark Springs Commissary is used as a building in the jail complex where the “Five Bold Women” are locked up. One by one, the cells are opened up and the women are loaded onto a stagecoach by Marshal Kirk Reed (Jeff Morrow) to be transported to a nearby penitentiary. As they ride through Bracketville on the buggy, the original song created for the movie plays, telling the story of their journey. 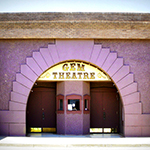 After learning about the possible threat to his cattle one night, Homer Bannon (Melvyn Douglas) and his grandson Lonnie Bannon (Brandon De Wilde) go into town to Claude’s Gem Theater to catch a movie. An animated short film called Clementine plays, and they sing along to the American Western folk ballad “Oh My Darlin’ Clementine." 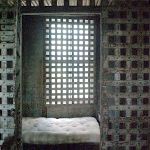 After 10 days on the run, Gregorio Cortez (Edward James Olmos) is captured when turned in by an acquaintance. The County Jail Museum in Gonzales was the perfect location to depict Cortez’s sentencing and false imprisonment because Cortez would have actually been locked up there over 100 years ago after he stood trial in Gonzales. 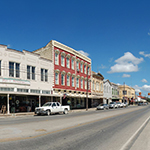 In the final season premiere of The Son, St. George Street in Gonzales was transformed into 1900's Old Mexico, lined with shops and a hotel. When Eli McCullough (Pierce Brosnan) rescues his son Pete (Henry Garrett) from a Mexican gang, he’s covered in dirt and his hair is long and unkempt, so Eli takes him to a barber shop in a nearby town to clean him up. Eventually, they leave the Mexican town more unwelcome than when they arrived. 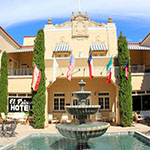 Though the Hotel Paisano doesn't appear onscreen in Giant, the hotel was the heart and soul of the cast and crew's time off set. Many of them stayed here throughout filming, and the hotel bar/restaurant was a favorite gathering place for Elizabeth Taylor, Rock Hudson, James Dean, Director George Stevens and the rest of the actors and crew. Stevens even used the ballroom to screen dailies. Today, there's still plenty of Giant memorabilia still on display celebrating the impact of what is perhaps the most iconic film ever shot in Texas on the area. 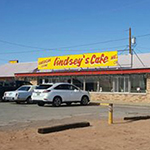 Tommy Lee Jones filmed much of Three Burials on the far West Texas ranch that he owned at the time, and shot other scenes in the town of Van Horn, not far from the ranch. In one of the most memorable scenes in the movie, Pete Perkins (Tommy Lee Jones) stands outside a run-down bar in rural Mexico and calls over the Van Horn Cafe waitress, Rachel (Melissa Leo), asking her if she will leave her husband for him. When she says no, his disconsolate, lost look is unforgettable. 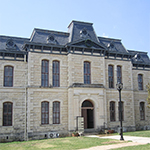 The Old Blanco Courthouse, built in 1884, was perfect to represent a building from the time period in True Grit. Scenes were shot in the courtroom, on the stairs, and in the hallways. After her father is murdered, Mattie Ross (Hailee Steinfeld) sets out looking for a man with “true grit” to help her track down the killer. She gets word of a ruthless, grizzled U.S. Marshal named “Rooster” Cogburn (Jeff Bridges) and runs into him at the town’s courthouse where he is testifying about a recent burglary and its casualties. 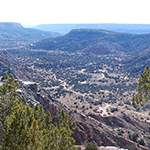 In the credits of The Sundowners, the film states: “All of this picture was made near Amarillo and Canyon, Texas… and in the Palo Duro Canyon with the help of the State of Texas...” No studio interiors were used in the production of this film, and the rugged beauty of the Palo Duro Canyon takes center stage and in many of the film’s scenes becomes a character of its very own. 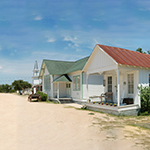 In the first episode of The Son, the town close to the McCullough Ranch was shot on Main Street Plaza at Star Hill Ranch. Pete McCullough (Henry Garrett) brings a dead body to the sheriff, trying to find out if the man was a criminal or if someone killed him in cold blood. Pete walks down the dirt road passing the period buildings of the Main Street Plaza set, and goes into the saloon to interrogate the bartender, only to find that his father Eli (Pierce Brosnan) may be up to no good. 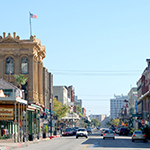 As cattle are being herded through the city, in the opening sequence of Gambler V, Butch Cassidy (Scott Paulin) and the Sundance Kid (Brett Cullen) look on from a nearby street corner. A policeman is trying to keep order, and Butch double dares the Sundance Kid to steal the officer’s pocket watch during the commotion. After he grabs it, they take off on a chase down the historic street! 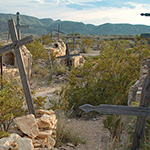 At the end of Gambler V, the Terlingua Ghost Town was used to represent the Mexican outpost to where the Wild Bunch escaped. Fearing for their lives with an army encroaching upon them, Etta Place (Mariska Hargitay), Brady Hawkes (Kenny Rogers), and his son leave the ruins and head to safety in the United States, while Butch Cassidy (Scott Paulin) and the Sundance Kid (Brett Cullen) stay behind to make one last stand as outlaws. 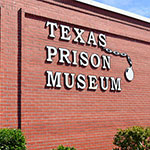 The Texas Prison Museum houses several artifacts used in the capture of the actual Bonnie and Clyde after Clyde Barrow raided the prison system's Eastham Unit and freed five prisoners. The opening scenes of both The Getaway & A Perfect World feature the Texas State Penitentiary at Huntsville. In Urban Cowboy, Wes Hightower (Scott Glenn) is seen as a bull-riding convict in the Texas Prison Rodeo in Huntsville. 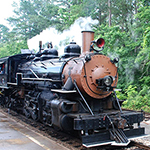 From action-packed heists to pre-battle recruitment, the Texas State Railroad is used as one of the most exciting locations throughout Texas westerns. 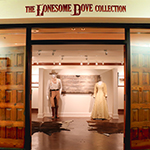 For admirers of Lonesome Dove, there's no better place than Texas State University - San Marcos for a behind-the-scenes look at the making of the 1989 miniseries. Located in the Alkek Library, The Wittliff Collections' permanent exhibit is only a portion of their massive Lonesome Dove production archive. Visitors can make an appointment to view other props, costumes, screenplay drafts, actors' notated scripts, and screenwriter Bill Wittliff's photographs.