Governor Greg Abbott today announced that the City of Pilot Point, having completed the multi-step training and certification process, has been designated as a Film Friendly Texas community by the Texas Film Commission, which for 50 years has helped to grow local jobs and economies by promoting the Lone Star State as the premier destination for film, television, commercial, animation, visual effects, and video game production.

“I congratulate the City of Pilot Point on earning the Film Friendly Texas designation and joining more than 150 other Texas communities who have received this recognition,” said Governor Abbott. “With our focus on unleashing the Lone Star State’s economic might, I am committed to working alongside all of our communities to ensure they have the knowledge and tools needed to succeed. Through the Film Friendly Texas training and certification process, communities large and small are readied to help match local businesses with production-related needs, creating jobs for Texas-based crew members and local residents, as well as spurring on-site spending at local small businesses. And as the Texas Film Commission celebrates 50 years of service, I am especially proud of all they have accomplished in helping communities like Pilot Point to market their unique local appeal and achieve economic recovery through media production."

"The City of Pilot Point earning this designation is a testament to their commitment to further building and diversifying the local economy and fueling long-term growth," said Senator Drew Springer. "The training and resources that Pilot Point will continue to receive through this partnership is great news for the future of the community and North Texas. I'm proud to represent and support Pilot Point in their efforts to create more jobs, strengthen small local businesses, and highlight the rich history of the city. I want to thank Governor Abbott for his commitment to equipping cities like Pilot Point to bolster Texas' economy."

"I am excited for the opportunities that the Film Friendly Texas designation is sure to bring for the City of Pilot Point, and congratulate city leadership for their initiative in seeking out and completing the requirements necessary to receive this certification,” said Representative Jared Patterson. “Pilot Point is a charming city that has so much to offer the film community and will undoubtedly represent the entire state of Texas well."

“Pilot Point is excited to make our Film Friendly certification official! Film crews took over the streets of Pilot Point in 1967 during the filming of ‘Bonnie & Clyde’ and the city now celebrates ‘the day Hollywood came to town’ with an annual Bonnie and Clyde Days festival,” said Denise Morris, Executive Director, Pilot Point Economic Development Corporation (EDC). “Pilot Point and the Lake Ray Roberts recreational area have endless opportunities for future site locations. The city and EDC recognize the economic impact of the moving image industry and value to our state, region, and city. We are pleased to formalize a process that makes Pilot Point Film Friendly.”

The City of Pilot Point joins more than 150 Film Friendly Texas communities that receive ongoing training and guidance from the Texas Film Commission on media industry standards, best practices, and how to effectively accommodate on-location filming activity in their community. 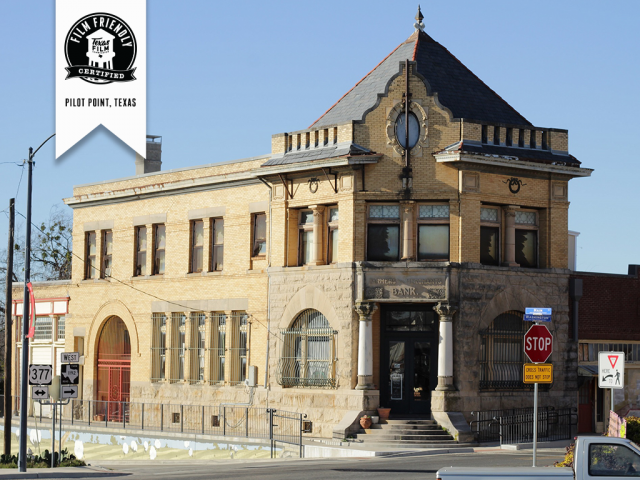